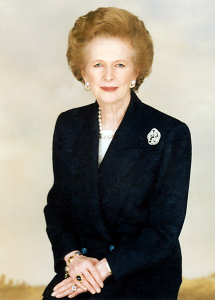 One need not agree with everything Margaret Thatcher said or did to recognize her as among the most important political leaders of the 20th century—the Iron Lady of British politics—a champion of freer markets, and a stern critic and dogged opponent of socialism.

She is best remembered by some of her own words:

"Without economic liberty, there could be no true political liberty."

"A man's right to work as he will, to spend what he earns, to own property, to have the state as servant and not as master, they are the essence of a free economy, and on that freedom all our other freedoms depend.”

"If you just set out to be liked, you would be prepared to compromise on anything at any time and you would achieve nothing."

“You don't win by just being against things, you only win by being for things and making your message perfectly clear.”

“I do believe that political arrangements which are based upon violence, intimidation and theft will eventually break down – and will deserve to do so.”

"A system of state control can't be made good merely because it is run by 'clever' people who make the arrogant assertion that they ‘know best’ and that they are serving the ‘public interest’ which of course is determined by them. State control is fundamentally bad because it denies people the power to choose and the opportunity to bear responsibility for their own actions."

"Some socialists seem to believe that people should be numbers in a state computer. We believe they should be individuals. We're all unequal—no one, thank Heavens, is quite like anyone else, however much the socialists may pretend otherwise—and we believe that everyone has the right to be unequal."

"The people want to live in peace, real, lasting peace. The peace that comes from independence of the state, and being able to run your own life, spend your own money, and make your own choices. And above all, the peace of a country that is properly defended against any potential adversary."

“Socialist governments traditionally do make a financial mess. They always run out of other people's money.”

Margaret Thatcher has passed away, but her eloquent and determined statesmanship will remain profoundly inspirational to all those fighting for a freer world.

View all articles by Ari Armstrong →
Letter to the Editor
Melissa Harris-Perry Says Your Kids “Belong to Whole Communities”Alex Epstein Visits Vassar: Some Students Learn, Others Disrupt
Return to Top