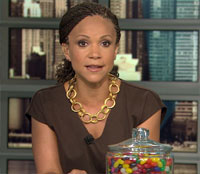 First, television host and university professor Melissa Harris-Perry said that “kids belong to whole communities.” As I pointed out, “a child belongs neither to his parents nor to ‘whole communities,’ but to himself. When someone belongs to someone else or to a group of other people, that person is a slave.”

Ah, but Harris-Perry didn’t really mean it, she claims in a response to her critics. She didn’t mean, for example, that the government may take children away from rights-respecting parents. She says, “That is not what I was talking about, and you know it.”

Leave aside for now why Harris-Perry would make an explicit statement, in a presumably scripted video, which she expects her readers to “know” she didn’t really mean. What position, after further “thought,” does she uphold? She now claims, “We have a collective responsibility to the children of our communities even if we did not conceive and bear them.” This “responsibility,” she suggests, means that the government may forcibly confiscate people’s wealth in order to subject children to government education.

Stepping away from her original position that children are property of the “community,” Harris-Perry now posits that adults are. She argues that “the community”—which, in practice, means whoever controls the government—may force adults to serve the community. . . .