“Attack Countermeasures” Video Shows How Not to Be a Victim 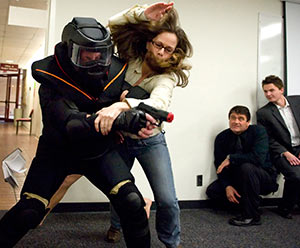 Although you’re far more likely to die in a car crash than at the hands of a mass murderer, you face some risk of a criminal assault or a terrorist attack, especially when our government is failing on multiple fronts to eliminate the threat of terrorism. So it is worth learning at least the basic principles of how to deal with such situations if they arise. Knowing a few essential tactics can radically improve your chances for survival.

The main point to grasp is that action often is possible even when facing horrific violence. In some cases of a shooter attempting to commit mass murder, the intended victims take no action against the perpetrator, and the crime ends only when police (men with guns) arrived on the scene—usually too late. In other cases, the intended victims do take action and manage to stop the perpetrator.

And the actions of a single individual can spur others to action. For example, after the perpetrator of the 1993 Long Island rail murders emptied two gun magazines, killing six and injuring another nineteen, someone finally yelled "grab him," and three other passengers tackled the criminal. Had passengers taken such action earlier, they might have saved more lives.

The New York Times reports on the work of researchers at Texas State University, who looked at 84 mass shootings from 2000 to 2010. According to the Times:

In 16 of the attacks studied by the researchers, civilians were able to stop the perpetrator, subduing him in 13 cases and shooting him in 3 cases. In other attacks, civilians have obstructed or delayed the gunman until the police arrived.

As one of the researchers, J. Pete Blair, told the Times, “You’re not helpless and the actions you take matter.”

That is precisely the attitude behind the production of a new video, Active Shooter Survival, produced and directed by Alon Stivi of Direct Measures International. (I’ve taken gun classes with Stivi, and Stivi has worked with my father, Linn Armstrong, in western Colorado to train police and administrators at schools in security and response tactics.)

The 75-minute video combines classroom discussions by Stivi and live demonstrations of tactics. The scenarios involve an assault on a classroom or an office where the intended victims do not have guns.

Stivi summarizes the basic options early in the video:

Either escape, evade, disengage; or barricade, hold your ground; or, if absolutely necessary, and there’s no other way, engage the active shooter. [That’s] better than just being shot.

Stivi demonstrates a variety of tactics: barricading a door, hiding if circumstances permit, safely exiting a room or building, and taking down the perpetrator if there is no other option.

In one particularly poignant segment, Stivi has participants play out two different scenarios. In one, having heard “shots” down the hall, all the intended victims crawl under their desks before the perpetrator enters the room. The result is that the criminal has all the time he needs to murder everyone in the room. In another scenario, after hearing “shots,” the participants assume defensive postures. When the attacker enters the room, the intended victims grab the attacker’s arms, tackle him at the knee, and then pile on top of him, subduing him.

Near the end of the video, Stivi discusses the prospect of physically confronting a criminal:

Once again, this is a last-resort survival measure. We trust and we hope that we will never have to . . . do something like that. But if we do, this is better than just being shot under a table and dying. And as you can see, this is not rocket science. It’s simple tactics that you could teach or translate to [other] people—those who want to do something, not those who have the victim mentality. The victim mentality is the problem; [if you want to survive] you can’t have it. [And] not everybody does [have it]. So you find those in the classroom [or elsewhere] who are willing to fight for survival. You coordinate their efforts, and your chances of survival are good—if you know what you’re doing.

If we want to deter criminals from attacking people in a public setting, the best thing we can do, if we find ourselves in such a situation, is to take action to save our lives. If no other option is available, that may involve taking down the attackers and pummeling them until they surrender. If so, their mangled faces can serve as a deterrent to other potential attackers by showing that some people refuse to be victims.

View all articles by Ari Armstrong →
Jonathan Hoenig Calls for Return to AmericanismPortrait of Joshua Lipana, by Bryan Larsen
Return to Top