42: The Triumph of Courage and Moral Certitude over Irrationality and Bigotry 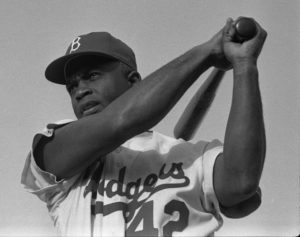 The movie 42: The Jackie Robinson Story is not a full biography on the life of Jackie Robinson, the black baseball player who broke Major League Baseball's "color line." Rather, the film covers the three year period from the 1945 signing of Robinson to a minor league contract by Brooklyn Dodgers president Branch Rickey to the end of Robinson's first year with the Dodgers in 1947.

42's narrow focus isn't a drawback, however; it enhances the movie's theme about the end of racial segregation in baseball, which these two men took the lead in achieving.

Robinson had to perform on the field in the face of extensive racial insults and abuse, nonacceptance from other ballplayers including many of his own teammates, hostile crowds, and repeated death threats. And perform he did, winning the National League's 1947 Rookie-of-the-Year award as the best of that year’s new players.

Inspiring from beginning to end, 42 shows the power of courage and moral certitude. Just two men—Branch Rickey and Jackie Robinson—succeeded against an ocean of irrationality and bigotry. The performances of Chadwick Boseman as Robinson and Harrison Ford as Rickey are captivating, and the film powerfully portrays the emotionally charged, racist atmosphere in which these two men succeeded.

We who cherish justice owe a major debt of gratitude to Jackie Robinson and Branch Rickey (as well as to their 1947 counterparts in the American League—Larry Doby and Cleveland Indians owner Bill Veeck). These heroic men, in pursuit of their own values, made America a better place for all of us to live.

View all articles by Michael A. LaFerrara →
Letter to the Editor
Mom Who Regrets Her Children Is Example of Altruism at WorkUpdate on Joshua Lipana
Return to Top