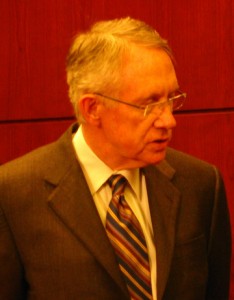 Yes, the national debt is a huge problem. But the proper way to address it is to cut federal spending, not increase taxes. As CBS reports, the senate instead passed a budget plan asking for $975 billion in net tax increases over the coming decade. The plan also includes more so-called “stimulus” spending: “Shoehorned into the package is $100 billion for public works projects and other programs aimed at creating jobs.”

The senate’s plan would not only further violate people’s rights to keep and use their own wealth, it would further damage the economy and impede growth. When the government takes money from people by force, it stops them from spending their wealth on projects and economic activities that serve their own goals and values. The government spends in some sectors only by forcibly taking people’s wealth, thereby preventing them from spending their own money in other sectors. This coercive reallocation does not stimulate the economy; rather, it siphons money from the economy into the government, where much or it is spent for administrative and other wasteful purposes, and then places the remainder back into the economy precisely where wealth creators in the private sector had decided it should not go. This is foolishness of the highest order.

Likewise, with “public works” projects, the government creates jobs for some only by violating rights and destroying jobs and prosperity for others. So far as infrastructure spending goes, as long as the government owns roads, bridges, and the like (why all such things should be privatized is the topic for another day), the government must maintain them. But government should never spend money merely to “create jobs,” for that violates the rights of those from whom the funding was taken and destroys economic activity where it otherwise would have flourished.

The Senate has called for tax hikes on the premise that they are necessary to deal with the problem of out-of-control federal spending. But that premise is false. The proper way to deal with out-of-control federal spending is to cut the spending. This would decrease rather than increase rights violations, and it would strengthen rather than further cripple the economy.