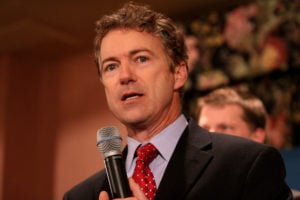 Which party will gain ground next year? Robert Borosage argues for Reuters, “The 2014 midterm election is more likely to be a debacle for Democrats than Republicans. It will take a true political miracle for Democrats to take back the House.”

But Rand Paul and his congressional allies are giving Democrats all the help they can by renewing the Republican assault on women’s rights.

With his “Life at Conception Act,” Paul hopes to totally outlaw abortion—even in cases of rape, incest, and risks to the woman’s health—outlaw all forms of birth control that prevent the implantation of a zygote, and outlaw all fertility treatments that result in the destruction of fertilized eggs.

The Act invokes the Fourteenth Amendment and claims that an embryo is a “person” from the moment of conception. To argue this point, Paul depends on an absurd equivocation. He claims, “The Life at Conception Act legislatively declares what most Americans believe and what science has long known—that human life begins at the moment of conception, and therefore is entitled to legal protection.” No one doubts that a human embryo is both human and alive—and thus “human life” in that sense—but what Paul does not establish is that an embryo or fetus is a person with the same rights as a born child or adult.

(Although Paul later seemed to soften his stance by claiming “there are thousands of exceptions” to his abortion ban, the only exception he specified was for the “life of the mother.” If an embryo is considered a person with the same legal protections of a born infant, then, logically, there can be no other exceptions.)

As Diana Hsieh and I point out in our article, “The Assault on Abortion Rights Undermines All Our Liberties,” an embryo or fetus lives in the womb, inside the body of the woman. Thus, it is not an individual person. By contrast, “The newborn infant is no longer a dependent being encased in and supported by the body of another; he is a person in his own right, living in a social context”—the only context in which rights can apply. (For our complete case, see the article.)

The government properly recognizes each pregnant woman’s right to choose whether to seek an abortion or carry her embryo or fetus to term. If the government instead pretended that an embryo is a “person” with full legal rights from the moment of conception, the government would face an immediate and stark contradiction: It would have to outlaw all abortion along with common forms of birth control and fertility treatments, which would clearly violate women’s rights to their bodies, their pursuits of happiness, their liberties, their lives. Paul’s position is not only logically absurd; it is also patently immoral.

Do Republicans really believe this is a winning political strategy in 21st-century America? If so, we’re more likely to see Democrats take back the House in 2014.