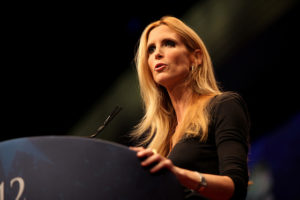 Lately, many Republicans have become sympathetic to the idea of giving legal status to illegal immigrants. But not Ann Coulter. She labels all such plans “amnesty” and harangues Republicans who support it.

Amnesty, in this context, means relieving current undocumented aliens of the legal penalties associated with breaking immigration laws, including related offenses such as obtaining falsified drivers licenses and Social Security cards. Although not all immigration reform proposals include amnesty, one major bipartisan proposal would “give all illegal immigrants instant legal status.”

Coulter recoils at the thought of such proposals. As she said at the recent Conservative Political Action Conference, “If amnesty goes through, America will become California, and no Republican will ever win another national election. . . . I see why Democrats would want amnesty,” but, for Republicans, it’s “suicidal.”

View all articles by Michael A. LaFerrara →
Contra Michael Tanner, Government’s Size is Not the Proper Focus for Advocates of LibertyJoshua Lipana’s Cancer Has Relapsed and He Needs Our Help
Return to Top