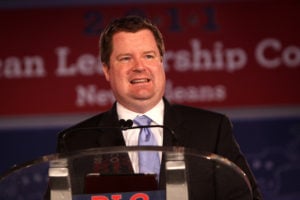 This week, the Supreme Court heard oral arguments in two key cases regarding same-sex marriage: challenges to California’s Proposition 8 and to the federal Defense of Marriage Act.

Republicans and conservatives have long expressed concern that legalizing same sex marriage will threaten their First Amendment rights, and these cases have prompted the latest round of alarm. For instance, Erick Erickson, managing editor of RedState.com, writes that same-sex marriage supporters “will have to decide which they value more—the ability of a single digit percentage of Americans to get married or the First Amendment. The two are not compatible.”

Within a year or two, we will see Christian schools attacked for refusing to admit students whose parents are gay. We will see churches suffer the loss of their tax-exempt status for refusing to hold gay weddings. We will see private businesses shut down because they refuse to treat as legitimate that which perverts God’s own established plan. In some places, this is already happening.

Although the legalization of same-sex marriage cannot cause such problems, the violation of property and contract rights can; and some businesses have faced legal challenges, fines, and other penalties for “discriminating” against gay couples. (See, for example, the Liberty Ridge Farms case of 2012.)

Erickson is right to oppose any “antidiscrimination” laws that would violate the rights of business owners or religious establishments to run their organizations as they see fit. But such concerns are not valid grounds for outlawing same-sex marriage. There is no conflict between religious freedom and the rights of same-sex partners to marry. The real issue at hand is the moral and legal propriety of recognizing and protecting voluntary, contractual relationships as such.

Individuals have a moral right to enter into contractual relationships with one another, so long as such agreements are made voluntarily and do not violate anyone’s rights. This right applies not only to business relationships, but to all voluntary relationships—including marriage contracts. Such contracts morally do not and legally should not require the approval of outside parties; they properly require only the agreement of the parties involved and the absence of initiatory force or fraud. That is what makes a contract valid.

If Erick Erickson and his fellow Republicans want to defend the essence of America—including freedom of religion—they will have to learn that its essence is the principle of individual rights. And that principle sanctions freedom of contract—including marital contract.

View all posts by Zachary Huffman →
What’s Wrong with Stomping on “Jesus”?As Some Filipinos Try to Die, One Tries to Live
Return to Top