Education Activist Michelle Rhee is Courageous, but No “Radical” 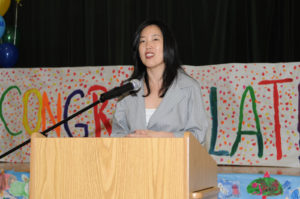 Michelle Rhee—a former Baltimore teacher who gained national attention as Washington DC’s first public schools chancellor, and founder of StudentsFirst—has acquired a reputation as an aggressive education reformer unafraid to challenge entrenched ideas, including those of her own Democrat Party and its constituents.

In describing “My Break With the Democrats,” Rhee recounts her 2007–10 stint with the DC public schools. Her “strong ideas” about school reform included support for charter schools, which were “anathema to teachers' unions.”

Another area where Rhee broke with Democrat dogma is school vouchers. Though “adamantly” opposed to vouchers at first, she eventually reversed course. The reversal came when she had to take a stand on the district’s existing Opportunity Scholarship voucher program, which was up for renewal. “As a good Democrat,” she says, “My inclination was to say no. . . . However,

I wanted to have my facts straight. So I decided to meet with families across the city and spend some time better understanding the Opportunity Scholarships initiative. It’s amazing what one can learn from talking to parents. . . .

After my listening tour of families, and hearing so many parents plead for an immediate solution to their desire for a quality education, I came out in favor of the voucher program.

“People went nuts,” she says. “Democrats chastised me for going against the party.”

Other policies advocated by Rhee, such as “the ability to reward good teachers and fire bad ones,” notes Leonard Pitts, encountered fierce opposition from the teachers union, which “fought Rhee with bitter tenacity, seeking to block her at every step.”

Rhee, whose mantra is “fighting to put students first,” describes herself as a “radical.” But, “radical” implies fundamental change, and, despite her courageous efforts, Rhee’s agenda is actually superficial and solidly in the camp of the disastrous status quo.

The mission of Rhee’s StudentsFirst, which she formed after leaving DC, is to “transform public education.” It calls for a “better” public education system, “one that puts students' needs before those of special interests or wasteful bureaucracies.” But, as long as tax dollars fund education—whether directly or through vouchers—special interests and wasteful bureaucracies will stand in the way of students, parents, and innovative educators.

Eliminating government interference in education would enable businessmen, educators, and parents—driven by love of money, love of their work, and love of their children—to create schools, develop curricula, and decide for themselves what is best for their schools, their classrooms, their kids.

Imagine Rhee operating in a fully free market, where no government education establishment exists to seize people’s money, give it to “educators” who can’t be fired, and force children into its “schools.” Rather than battle coercive unions and government officials, she could direct her energies and resources, free of political obstacles, toward creating or expanding private schools that implement her ideas.

Sadly, Rhee is no radical; she does not advocate a free market in education. Rather, she advocates superficial tweaks to the rights-violating and consequently disastrous status quo. And, insofar as Rhee succeeds in her current mission, she will only further entrench that status quo.

“Radical” is the right approach, Ms. Rhee; but, to effect positive change, you must be genuinely radical.