Cyprus Rejects One Form of Theft, Leaves Others Intact 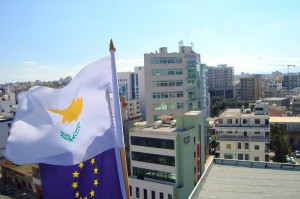 Just days ago the eurozone and the International Monetary Fund pressured the government of Cyprus to blatantly steal up to ten percent of the savings accounts of everyone with money in the country. Reuters reports the results: “People rushed to banks and queued at cash machines that refused to release cash as resentment quickly set in.”

A proposal to modify the plan to exempt the accounts of less-wealthy holders did not mollify protesters, and yesterday the nation’s politicians rejected the plan, the AP reports.

But why would anyone ever seriously consider such an absurd, rights-violating plan? The AP summarizes:

Cyprus needs 15.8 billion euros ($20.4 billion) to bail out its heavily indebted banks and shore up government finances. If it doesn't get the money, the banks could fail, Cyprus' government finances could be ruined for years and the country could face expulsion from the 17-country euro currency union. Eurozone countries and the International Monetary Fund have pledged to provide 10 billion euros ($12.9 billion) in rescue loans if Cyprus can come up with the remainder.

In other words, Cyprus “needs” to steal its own citizens’ money so that other European governments will steal their citizens’ money in order to subsidize the financial irresponsibility of Cyprus’s bankers and politicians.

Obviously ripping off savers will not solve Cyprus’s long-term problems: It will instead cause people to mistrust Cyprus’s government and banks and to redirect their money accordingly. What the government of Cyprus should do instead is begin the morally correct yet politically difficult process of correcting the wrongs that caused the problem to begin with. The government should begin eliminating the banking regulations that promoted irresponsible lending, and begin phasing out the welfare state. In short, the government should begin recognizing and protecting the rights—including the property rights—of its citizens.