A 15-Year-Old Boy and Your Future 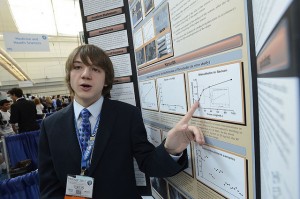 Jack Andraka is not your typical cancer researcher. His first research project resulted in a non-invasive, simple, sensitive, and effective test for detecting pancreatic cancer. His test is

According to a recent article at Smithsonian.com, and a TEDXTalk by Andraka, pancreatic cancer is non-symptomatic, meaning that it cannot be detected until very late in the course of the disease. And with late detection comes a very high mortality rate. Only 5 percent of diagnosed patients will live for five years, with the average lifespan after detection only three months. Forty thousand people die of pancreatic cancer each year. And yet, with early detection, survival could be close to 100 percent.

Andraka’s test uses a strip of filter paper treated with a mixture of carbon nanotubes and antibodies that are sensitive to mesothelin, a protein produced by the pancreatic cancer. A single drop of blood and subsequent measurement of the electrical resistance of the paper strip is all that is required for a definitive result. The cost is 3 cents. The time needed is five minutes. And the test can readily become a standard part of a routine physical exam.

Compare Andraka’s test with the current gold standard of protein detection: a sixty year old technique that misses 30 percent of cancer victims, costs $800 per test, and is not covered by insurance.

Although much work remains to be done, Andraka has discovered a technique that can be applied to many forms of cancer, waterborne and airborne viruses, and blood pathogens such as AIDS and STDs. His current test has already proven effective on both ovarian and lung cancer.

Thanks to Andraka’s brilliant use of scientific methods, his hard work, and his dedication to an idea, we may soon enjoy a world in which far fewer people suffer and die from disease. Not only will we and our loved ones be able to live longer, happier lives; we will also benefit from future Steve Jobses, Patrick Swayzes, Henry Mancinis, Sally Rides, and Wernher Von Brauns, who, rather than succumbing to wretched diseases will continue living and filling our world with wonderful, life-serving values.

View all articles by Howard Roerig →
Don’t Expand Sales Taxes, Abolish ThemThe Fruits of Capitalism Are All Around Us
Return to Top