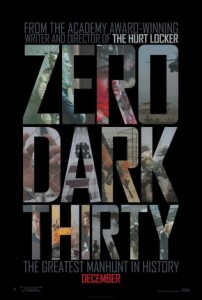 Zero Dark Thirty is the story of a heroine.

It chronicles the efforts of Maya (Jessica Chastain), a CIA analyst who relentlessly hunts Osama bin Laden in the years following 9/11. “Relentless” is the right word to describe this young American woman. Recruited out of school by the CIA, for virtually a decade she does nothing but search for bin Laden. Numerous obstacles impede her. None daunt her. None stop her.

Her leads dry up. The Taliban murder her allies. The CIA bureaucracy does not heed her. She persists. Viewers know how this story ends, but that does not matter. The film is a mesmerizing, white-knuckle tale of a woman’s years-long quest to avenge 9/11 and protect America.

Zero Dark Thirty is the story of Achilles, of El Cid, of Patton—not so much a tale of war as of a lethal warrior on a ruthless quest whose sole alternative to victory is not defeat but death. Maya will never give up. If bin Laden could have known that such a killer hunted him, perhaps surrender or suicide would have crossed his mind. After the Taliban kill Maya’s colleagues and her lead is expunged, she is asked what she will do. She responds: “I will smoke everyone involved in this op, and then I will kill bin Laden.” Observing this warrior cleave through obstacles, even the most jaded of modern cynics might suppose that if the republic had but two more like Maya—one serving as POTUS, and the other as director of central intelligence—the war against Islamic totalitarianism could be as decisively concluded as was the war against fascism. . . .