To Curse Machines is to Curse the Mind 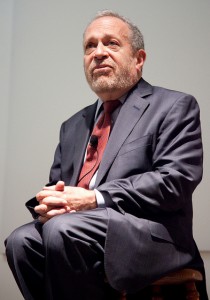 The French economist Frédéric Bastiat wrote those words in the first half of the 19th century, and he soundly debunked the nonsense involved in such claims. Unfortunately, however, the nonsense is still with us, the cry against machines continues to rise from ignorant prejudice, and the echo of that cry continues to resound in the newspapers.

Exhibit A, from the Wall Street Journal: Peter Diamandis, founder of the X Prize for the development of spacecrafts, said at a recent event, “We’re literally at the knee-curve of a massive explosion of innovation.” Good news, right? Not if you’re Robert Reich, former Labor Secretary:

[Reich] asked Mr. Diamandis how people would find employment in an era of super-powered robots and 3D printers. And if people can’t find jobs, “who is going to buy that stuff” that companies want to sell, Mr. Reich asked.

Exhibit B, from the Associated Press:

Martin Ford saw it everywhere, even in his own [software] business. Smarter machines and better software were helping companies do more work with fewer people. . . . An ordinary entrepreneur might simply have welcomed the cost savings. But something nagged at Ford: He wondered how a consumer economy—and 70 percent of the U.S. economy consists of consumer spending—could function if machines kept dislodging the workers who did the vast majority of the spending.

"At some point you simply will have too few viable consumers to power a healthy economy," he says.

By this “logic,” any labor-saving device is a bane rather than a benefit to people. But a quick look at history

disproves the claims of Reich and Ford. Oil producers put whalers out of business; auto makers put horse-buggy manufacturers out of business; and computers put typists and a host of other workers out of a job. But was the result chronic unemployment? Hardly. Instead, people started working in new fields, ranging from automobile design to computer programming to MRI operation to videography. They also moved into jobs that, in previous centuries, were not viable for a mass market, jobs ranging from massage therapy to counselling to pet care.

Machines enable people to produce more wealth in less time. Although the invention of a new machine can cause short-term challenges for people as they transition to new jobs, the consequence of invention is more alternatives, more wealth, an increasingly varied and robust economy, and a higher standard of living.

Bastiat explained why we should welcome inventions rather than fear them:

The invention and [one] worker . . . now do the work previously accomplished by two workers. The second worker . . . performs some new work. . . . These workers . . . produce something that was impossible to produce before the invention; from which it follows that the final result of the invention is an increase in satisfactions with the same amount of labor.

Machines and new inventions do not cause chronic unemployment; they enable people to work in an ever-growing range of fields and to grow wealthier—because they enable people to do less laboring and more thinking. As Bastiat put it, “to curse machines is to curse the human mind.” And to praise inventiveness and new technology is to praise the mind—which is the fundamental source of human progress and survival.