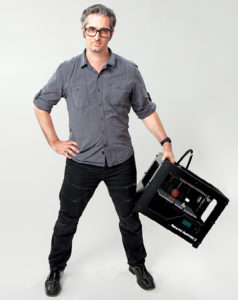 Fans of Star Trek will recall Captain Picard placing an order for “tea, Earl Grey, hot”—and seeing a replicator instantly produce the tea, cup and all, on demand. Although such sophisticated means of replication remain beyond our reach (for now), today’s innovators are moving in that direction with 3D “printers.”

First a note of history: The methods of mass production pioneered in the 19th Century came into full flower in the 20th Century, as with Henry Ford’s assembly lines for the manufacture of automobiles. In producing goods from clothing to cars to books, people went from painstakingly hand producing specialized items to mass producing standardized items with the aid of complex machines. The result was breathtaking expansion of wealth creation, vast improvements to standards of living, and the rise of the middle class.

It seems likely that a signature of the 21st century will be a revolution in micro-production, the development of machines—themselves mass-produced—capable of economically producing small quantities of specialized items.

The Wall Street Journal offers a possible example suggested by entrepreneur and author Peter Diamandis: “Lego won’t be a toy manufacturer. It will be an information company that creates blueprints for toys. Consumers will produce the parts at home using 3D printers that spit out Legos—along with all sorts of other objects.”

Various parties are already developing and working with such technology. French sculptor Gael Langevin is developing a robot assembled partly from “printable” parts, CNN reports. Langevin explains, “It can grab hold of things, tilt its head and move its arms around in various ways . . . and when I get around to building some legs, that's when things will get really interesting.” Space.com reports that the European Space Agency is looking at ways to construct a moon base using 3D printing technology. TechCrunch reports that Makerbot donated 3D printers to help produce a prosthetic hand for a South African boy (see the video below). And, as Kurzweil reports, iRobot Corporation has filed a patent for a “Robotic Fabricator” that combines 3D printing with visual scanners and “secondary manufacturing operations such as wire placement and hardware testing.”

Those who fear that such technology might drive the creativity from the human race need only pause to consider that the technology is itself a magnificent achievement of human creativity—an achievement that will allow people to spend increasingly more of their time conceiving, creating, and enjoying not only manufactured goods, but also literature, music, intellectual works, social and sporting events, and so on.

In appreciation and anticipation of such progress, let us echo Picard in saying: “Make it so!”