Scientists Generate Electricity from Coal Without Burning It 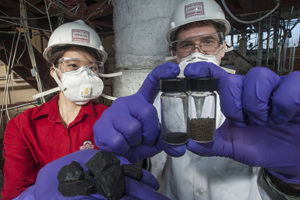 Thomas Newcomen first developed his steam engine in 1712 to provide energy for pumping water out of Britain’s coal mines, enabling deeper, more-fruitful mining. Newcomen’s engine was the precursor to today’s coal-fired (steam) generating plants that, until just a few years ago, provided 50 percent of all electrical energy in the United States.

Even with the severe restrictions on the construction of new coal-fired plants and the conversion of many existing plants to use natural gas, Americans still rely on coal for 34 percent of our energy. Coal provides more energy than any other fuel source today.

Unfortunately, with new restrictions from the EPA on coal production and use, and with increasing pressure from environmentalists, energy companies are faced with the almost impossible challenge of replacing their coal-fired generation capacity with some other source. Fortunately, thanks to a new development out of Ohio State University’s Clean Coal Research Laboratory, the task may be more manageable and less costly than it otherwise would have been.

Liang-Shih Fan, professor of chemical and biomolecular engineering, and director of the Clean Coal Lab, has just completed a 203 hour test of a radical new way of obtaining energy from coal. Typical coal-fired power plants burn coal to boil water, and run the resultant steam through turbines to produce electricity. Fan’s process, a new technology called “coal-direct chemical looping,” does not burn the coal. Instead, it chemically converts coal to heat in a sealed reactor chamber. Tiny iron oxide beads help to deliver oxygen to the coal particles, which are then cycled through an airflow chamber for re-oxygenation, then run back through the reaction chamber. This is the “looping” in the technology’s name. The process gives off no air pollution, and the captured carbon dioxide is ninety-nine percent pure, enough to make it a valuable commodity.

The test, which was run on a lab-sized reactor, produced a continuous twenty-five kilowatts of power. The next step is to scale the technology to a larger plant, and a 250 kilowatt plant is under construction in Alabama, with energy production slated to start by the end of 2013. Fan believes the technology can be incorporated into larger power plants within five years.

It is an atrocity that anti-technology goons seek to throttle or thwart man’s use of fossil fuels. It is a testament to the power of reason that scientists such as Dr. Fan and his team are able to find ways around roadblocks erected by such goons and to continue making industrial progress. Of course environmentalists will fabricate some “reason” why this new technology must be stopped as well, and we must remain ever vigilant to expose their distortions and to spread the philosophy that holds man’s life as the standard of value. But let us also remember always to extend praise and appreciation to the great scientists who figure out how to command nature and transform it to suit our needs.

Thank you, Dr. Fan and your team, for developing this amazing technology, which shows great promise for everyone who wants to live and prosper and thus needs abundant electrical energy.

View all articles by Howard Roerig →
Zero Dark Thirty Actors Bring Attention to Doctor Imprisoned for Helping Kill Bin LadenBefore There Was Amazon, There Was the Sears Catalog
Return to Top