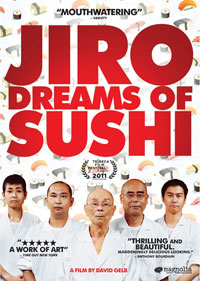 At first glance, the documentary Jiro Dreams of Sushi may not appear that interesting. It’s set in Tokyo, Japan, in a small restaurant with free Pachinko machines, serving just ten people at a time. And it’s about a man who prepares raw fish. But if you enjoy drama involving an individual’s passionate pursuit of a difficult skill, if you derive pleasure from seeing someone perform a job exceptionally well, if you regard productive work as a noble activity and like seeing it treated with reverence, this may be one of the most interesting and inspirational documentaries you’ll ever see.

Unlike great documentaries of the past, such as Spellbound (which showed kids working diligently to win a spelling bee), Jiro Dreams of Sushi is not primarily about a novice seeking to become great. It is about 85-year-old Jiro Ono, who is arguably the top sushi chef today and perhaps of all time.

The movie shows Jiro at work running his restaurant, documents how he became a master of the trade, and shows how he trains others, including his two sons, to be first-rate chefs in their own right.

The learning process for his apprentices is, as it was for him, grueling and long. As Yamamoto, a food critic, explains:

When you first sit down at Jiro’s, they give you a hand-squeezed hot towel. An apprentice must first be able to properly hand squeeze a towel. At first the towels are so hot they burn the apprentice’s hands. It’s very painful training, which is very Japanese. Until you can adequately squeeze a towel, they won’t let you touch the fish. Then, you learn to cut and prepare the fish. After about ten years, they let you cook the eggs. . . .

Review: FrackNationReview: Beyond Politics, by Randy Simmons
Return to Top