Review: The Island at the Center of the World, by Russell Shorto 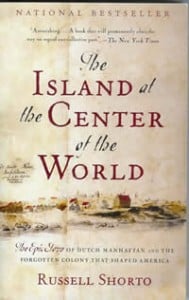 “[E]ach person shall remain free, especially in his religion, and . . . no one shall be persecuted or investigated because of their religion” (p. 96).

Those words evoke America’s revolutionary era, but they were penned two centuries earlier. They are part of the Dutch de facto constitution, the Union of Utrecht, drafted in 1579 after thousands of Dutchmen had suffered religious persecution by the Spanish in the form of torture and death. To Russell Shorto, a writer for The New York Times Magazine, these words speak directly to the “tolerance” embodied by the 17th-century Dutch Republic and its colonies, particularly the island colony of Manhattan, or New Amsterdam, after English explorer Henry Hudson claimed the land for the Netherlands in 1609.

In The Island at the Center of the World, Shorto’s enlightening book about this period, he writes: “This sentence became the ground on which the culturally diverse society of the seventeenth century was built” (p. 96).

In a later chapter titled “Booming,” Shorto notes that when religious groups, particularly the Jews, were persecuted in New Amsterdam, they appealed to the republic’s freedom-of-conscience law; and others, led by the Quakers, signed the Flushing Remonstrance, a document that stated “love peace and libertie . . . which is the glory of the Outward State of Holland” extends even “to Jewes Turkes and Egiptians” (p. 276). Shorto regards this document as a key link between the motherland’s constitution and America’s founding ideals.

Shorto can confidently assert these connections, in part because his book weds the histories of the 17th-century Dutch settlement of New York to the most recent, thorough, and competent translations of the colony’s twelve thousand surviving archival documents, including letters, records of court proceedings, and wills. These documents unveil facts about the Dutch people’s ideas, culture, and governance, including freedom of conscience, which helped shape the city and the United States but rarely, if ever, saw the historical light of day in books that otherwise centered on Puritans and America’s so-called religious foundations. Shorto demonstrates persuasively that the Dutch people’s cultivation of a multinational, multireligious colony is an important yet unheralded legacy of New Amsterdam. And he shows that this legacy is an outgrowth of the motherland’s religious freedom. . . .

View all articles by Joseph Kellard →
Letter to the Editor
Review: The Little Book of Talent, by Daniel CoyleThe Importance of Protocols for Living Well and Avoiding Problems
Return to Top