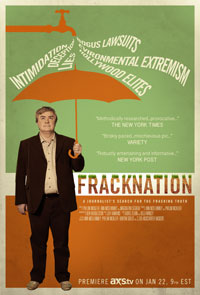 Hydraulic fracturing, more commonly referred to as fracking (or sometimes frac’ing), is a decades-old method of extracting oil and natural gas, which, in combination with more recent innovations, has turned previously inaccessible shale formations into highly productive energy sources. When fracking is mentioned in the media these days, however, it is often in the form of negative reports alleging dangers of the process, exaggerating known risks, and promoting the latest anti-fracking crusade by one “environmental” group or another. Fracking has many detractors and few defenders.

Recently however, a new and decidedly supportive voice has been added to the discussion about fracking: that of investigative journalist Phelim McAleer. FrackNation, the feature-length documentary film he produced and directed along with Ann McElhinney and Magdalena Segieda, and in which he stars, is a powerful defense of fracking. Importantly, the film adds more than just McAleer’s voice to this international debate—it adds the voices of many individuals who have been deliberately ignored in the rush to declare fracking dangerous and harmful. These include families whose farms have been saved by revenues from fracking, and those whose farms and livelihoods are threatened by moratoria and bans on the process, driven by fearmongering and ignorance of the facts.

Early in the film, McAleer identifies Josh Fox as a primary source of the widespread misinformation about fracking. Fox wrote, directed, and starred in the anti-fracking film GasLand, one particularly notorious sequence of which involves the ignition of tap water as it emerges from the faucet of a kitchen sink. The sink is immediately awash in flames, and nearby fracking is blamed for contaminating the groundwater with methane. In FrackNation, McAleer shows us this clip, then cuts to footage of Fox answering questions from the front of a large auditorium at a screening of GasLand. McAleer raises his hand, stands up, and asks Fox whether it was true that locals had long known that one could light the water on fire in that town, even for decades prior to the advent of fracking there. Fox dodges and dances around the question until McAleer finally pins him down. Fox reluctantly admits that it is true, adding, “but it’s not relevant.” . . .