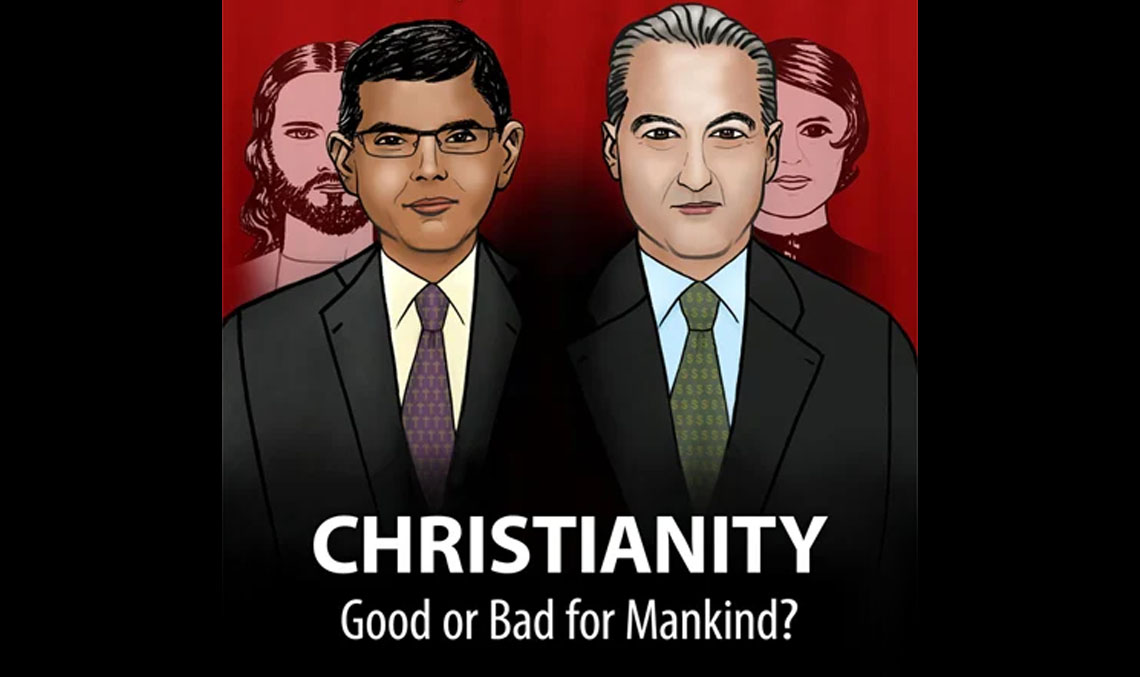 Editor’s note: Christian intellectual Dinesh D’Souza and Objectivist philosopher Andrew Bernstein met at the University of Texas–Austin on February 8, 2013, to debate the question, “Christianity: Good or Bad for Mankind?” Mr. D’Souza argued that Christianity is good; Dr. Bernstein, the alternative. 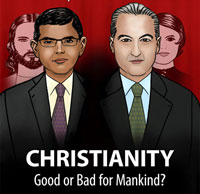 The debate, cohosted by The Objective Standard and University of Texas Objectivism Society, and paid for by TOS, was Livestreamed across the globe. The video is now available on TOS’s YouTube channel, where, as of this writing, it has been viewed by more than eight thousand people.

We present here the complete, unedited transcript of the debate, not only in the interest of sharing the debaters’ arguments, but also in the interest of generating further debate on the subject. The future will be determined largely by the outcome of the conflict between religion—primarily Christianity, which is by far the most influential religion in America and the world—and Objectivism, the only philosophy that recognizes and upholds the requirements of man’s life on earth as the standard of moral value. It is high time for this debate to be in the open and in full swing. In this regard, we see the debate between Mr. D’Souza and Dr. Bernstein as the intellectual shot heard ’round the world.

Because this debate entails almost two hours of extemporaneous dialogue, the speakers’ words and formulations are, of course, not as polished or grammatical as their written and edited text would be. Please bear this in mind while reading the transcript. And please share the transcript and the video with friends and family. The more people who hear clearly articulated arguments comparing and contrasting religion and Objectivism, the more will come to understand and embrace Ayn Rand’s “philosophy for living on earth.” —Craig Biddle

Grant Baker: Good evening. My name is Grant Baker. I’m the president of the UT [University of Texas] Objectivism Society, and on behalf of UTOS welcome to the debate: “Christianity: Good or Bad for Mankind?” . . .

I’d like to give special thanks to The Objective Standard, which made this event tonight possible. I’d also like to thank the paying members of UTOS, the volunteers who worked tirelessly to promote this event, and especially Brittney Rivera, who has worked months bringing this debate together. Great job, Miss Rivera. [Audience applause]

Moderating tonight is professor Drew Thornley. A native of Jasper, Alabama, Drew Thornley is a graduate of the University of Alabama and Harvard Law School. A licensed attorney, Drew has spent time in private practice in the nonprofit and public policy arenas, and is now a full-time lecturer in the department of business, government, and society of the McCombs School of Business at UT-Austin. Please join me in welcoming Professor Drew Thornley. [Audience applause]

Drew Thornley: Good evening and welcome. It’s nice to see all of you even though I can’t actually see any of you right now [given the lighting on stage]. We appreciate that you joined us tonight.

Tonight, two scholars, one a conservative Christian, the other an Objectivist atheist, will square off on the question, “Christianity: good or bad for mankind?”

Taking the position that Christianity is good for mankind is Dinesh D’Souza. Mr. D’Souza has had a twenty-five-year career as a writer, scholar, and public intellectual. A former policy analyst in the Reagan White House, Mr. D’Souza also served as the John M. Olin Fellow at the American Enterprise Institute, a fellow at the Hoover Institution at Stanford University, and president of The King’s College in New York City. Mr. D’Souza is the executive producer and codirector of the film 2016: Obama’s America; and the author of many books, including the New York Times best-selling books Illiberal Education, What’s So Great About Christianity, The Roots of Obama’s Rage, and Obama’s America: Unmaking the American Dream.

Taking the position that Christianity is bad is Andrew Bernstein. With a PhD in philosophy from the Graduate School of the City University of New York, Dr. Bernstein teaches philosophy at CUNY Purchase, was named outstanding teacher of the year in 2004, he is a contributing editor of The Objective Standard, and the author of several books as well—including Objectivism in One Lesson: An Introduction to the Philosophy of Ayn Rand and Capitalist Solutions: A Philosophy of American Moral Dilemmas. Dr. Bernstein’s book in progress is titled Religion Versus Man.

Following the presentations by our two debaters, we will open things up to a Q&A with you, our audience members. This period will last for twenty minutes. I’ll speak more on this later when the time comes. Finally, once the Q&A period has concluded, each of the presenters will spend two minutes in closing remarks.

We ask that you please give each debater your attention and utmost respect as they speak. Please now join me in welcoming each presenter to the University of Texas at Austin. [Audience applause]

Andrew Bernstein: Thank you. Can everybody hear me? All right. Now the criticisms I’m going to make are applicable to any religion—to Judaism, Islam, any of them. [They are] applicable to religion as such. But since Dinesh is concerned to defend Christianity, I’ll confine my criticisms to Christianity.

The crimes of Christianity against mankind are too lengthy to go into in a debate. So, just a few.

What was that like? Well, just to take a few examples, the Arians who disagreed with the Orthodox Catholics on the nature of Jesus, there was bloody disagreement; thousands of Arians were killed by the church. The suppression of the Manichean heresy was even worse. The Church suppressed it in the 5th century; it reemerges in the 13th. The pope’s army of heretic hunters burst into the city of Bergere, in modern-day France, slaughtered twenty thousand of the heretics—men, women, children, babies, the elderly—and the papal emissary writes to the Pope, “God’s justice is a wonderful thing.”

Even into the 16th century, even after the Renaissance has begun to bring back reason into the Western world, the Christians are still at it, still slaughtering each other in the Protestant-Catholic wars—for instance, the St. Bartholomew’s Day massacre [where] thousands of Protestants were murdered. I could go on. There’s no need. Why?

View all articles by Andrew Bernstein →
Letter to the Editor
Why “Big Government” is Not the ProblemRobert G. Natelson on State-Driven Amendments to Restrain Federal Spending
Return to Top