Review: Beyond Politics, by Randy Simmons 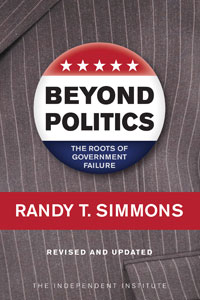 If you want to learn the theories and history of economists who champion government controls of the economy—and of economists who criticize such intervention—Randy T. Simmons’s Beyond Politics: The Roots of Government Failure is a fantastic resource.

As the title of the work suggests, Simmons believes that, most often, government creates far more problems in the economy than it solves. The revised and updated 2011 edition, based on the 1994 book by Simmons and William C. Mitchell, covers recent economic research and recent events, such as the mortgage crisis, in making its case.

Although Simmons’s book contains some complex graphs and discussions of technical economics, it is accessible to ambitious laypersons, especially those with some background in economics. The language is occasionally dense and difficult to read, but mostly the contents are organized sensibly and explained clearly. I particularly appreciate the bibliographical notes with which Simmons ends each chapter; these are useful guideposts for further reading on a host of topics.

Simmons divides his book into four main parts (plus a concluding part in which he discusses strategies for “creating a climate for liberty”).

In Part I, Simmons lays out the standard case for government intervention, focusing on the various types of alleged “market failures” said to justify government action. Simmons summarizes:

“Market failure” is the modern justification for government action. And that justification has been used by consumers, activists, politicians, special interests, and bureaucrats to produce broad-ranging programs, rules, and agencies to control and influence economic choices. Political control over private economic action became a fact of life during the last century. Rent control, pollution regulation, safety rules, import restrictions, fuel economy standards, and thousands of other controls have been enacted to overcome perceived imperfections in markets. (p. 5)

Simmons discusses a wide range of stipulated causes of “market failure,” including “externalities” (“costs” imposed on others without their consent), “public goods,” and “imperfect” competition. Simmons explains that, to address such stipulated problems, the political scientists and economists who favor expansive government control of the economy tend to regard the state as an ideal, beneficent mechanism by which informed “scientific managers” can correct “market failures.” . . .

View all articles by Ari Armstrong →
Review: Jiro Dreams of SushiReview: The Little Book of Talent, by Daniel Coyle
Return to Top