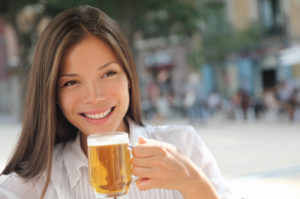 Antitrust laws grant government broad-based powers to abrogate or alter consensual contracts, powers that make virtually every large-scale marketing practice subject to government approval. What is the DOJ’s motivation in this case? “U.S. authorities,” reports the Journal, “said they want to prevent any overcharging by the global giants that dominate mass-market brews.”

Leave aside the DOJ’s absurd rationale, which, given the scores (if not hundreds) of beer brands available today, can be seen by a stroll through any liquor store or supermarket. Like all antitrust actions, including several other thwarted merger agreements noted by the Journal, this suit is an illegitimate exercise of government power. Why? Because government’s only proper function is to protect rights, and this merger is a voluntary contractual agreement that violates no one’s rights.

If the owners and shareholders of both companies think they can profit more by merging than by remaining separate, then that is what they should do; and they have a moral right to make the deal.

But what if the new, larger beer company “overcharges” consumers? What does that even mean? If a sale is voluntary, how can anyone be “overcharged” in the process? The fair price is precisely the price agreed upon by both parties.

Buyers and sellers have a moral right to voluntarily agree to the terms of an exchange. Anheuser-Busch cannot force people to buy its beers. Those who choose to buy them, do so voluntarily. That’s fair.

Of course, business mergers often result in increased efficiency and lower prices; so anyone concerned with such things should even on sheerly economic grounds be against antitrust laws. But even if Anheuser-Busch raised prices, it has a moral right to do so—and customers have a moral right to pay those prices or to seek lower-priced beer from other providers. Government has no legitimate right to interfere in voluntary market dynamics.

So long as the companies commit neither force nor fraud, Anheuser-Busch and Modelo have a right to leverage the valuable products they created in any way they judge to be most profitable, whether through buyout agreements, new pricing policies, or Anheuser-Busch’s strategy “to augment its position in the fast-growing Mexican market while expanding the reach of Modelo brands globally.”

Whatever the beer-makers’ strategic reasons for their merger, the government should protect, not violate, their rights.

View all articles by Michael A. LaFerrara →
Thank-Yous and Apologies regarding the D’Souza-Bernstein DebateVideo: The Trinity of Liberty: Individualism, Individual Rights, and Independent Thinking
Return to Top