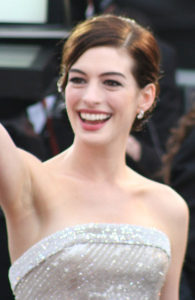 Congratulations to Anne Hathaway for taking home the Oscar for best supporting actress for her performance in the film Les Misérables. Congratulations to her also for correctly understanding the nature of sacrifice—and for refusing to describe her value-achieving actions with the term.

Although many people describe hard work as a “sacrifice”—for example, Entertainmentwise claims that Hathaway “sacrificed a great deal” to make the award-winning movie—the term makes no sense in that context. If a “sacrifice” means working hard to achieve one’s life-promoting values, as well as surrendering one’s values (say, by becoming an impoverished drug addict), then the term is worse than meaningless: It subverts and sullies life-promoting actions by equating them with their opposite.

Hathaway discussed her work for Les Misérables during an interview last year:

Reporter: When you look at how much work you had to do to prepare for this role [for The Dark Knight Rises], and then also a rigorous role in Les Mis as well—when you decided you wanted to be an actress years ago—this is the kind of stuff you signed up for?

Hathaway: They don’t feel like sacrifices when you’re making them. I mean, I love what I do for a living, and getting to transform is one of the best parts of it. So I never think about it like that.

Hathaway is exactly right: Working hard to achieve one’s values—paying the price required to pursue the career one loves—is not a sacrifice. Indeed, if Hathaway had given up her challenging role in Les Mis—if she had decided not to work hard to advance her career—that would have been the true sacrifice.

Again, congratulations to Hathaway for winning the Oscar—and for working hard to pursue her values in life.