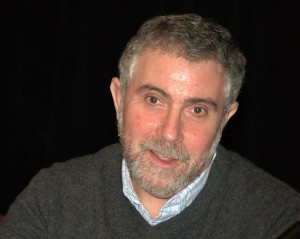 Modern American politics continues to read like something out of Atlas Shrugged, Alice in Wonderland, or The Onion. As a recent example, various economists, pundits, and politicians have, with a straight face, endorsed the minting of a trillion-dollar coin to escape the debt limit. Talking Points Memo offers the background. Although the Treasury Department opted not to pursue the option, the fact that so many people seriously considered it shows how absurd things have gotten.

In endorsing the idea, Paul Krugman explains how it would work:

The Treasury would mint a platinum coin with a face value of $1 trillion. . . . This coin would immediately be deposited at the Federal Reserve, which would credit the sum to the government’s account. And the government could then write checks against that account, continuing normal operations without issuing new debt.

In other words, opines Krugman, there’s no reason for the federal government to go deeper into debt; it can simply declare that it has more money.

However, as is obvious to everyone with even a partial grasp of reality, arbitrarily creating more dollars does nothing to increase the amount of real wealth. Instead, it transfers real wealth to the federal government by devaluing the dollars held by private citizens; it is a form of theft. Further, when the federal government spends dollars—whether collected via taxation or created via inflation—it either directly purchases the labor of bureaucrats and contractors for government projects, thereby diverting resources that would otherwise go to private development, or it forcibly transfers wealth from producers to welfare recipients.

Escaping the debt limit through (in Krugman’s words) the “accounting trick” of the trillion-dollar coin would only expand the already out-of-control federal spending by stealing more money from American producers.

Krugman does, however, make a good point: Congress imposed the debt ceiling and passed “automatic” spending increases, mostly for “entitlements.” In other words, Congress increased the budget and precluded the federal government from spending more money to cover the increase.

Government efforts to solve government-created spending problems by means of monetary make-believe have brought us a $16.4 trillion national debt. A make-believe trillion-dollar coin will only worsen the problem.

The solution to the government’s spending problem is not to issue a wealth-redistributive trillion-dollar coin. That’s like trying to solve a crime with a lucky charm. The solution is to decrease the extent to which government violates rights. The solution is for Congress to cut federal spending. And the only way Congress will do that is if the American people demand it.