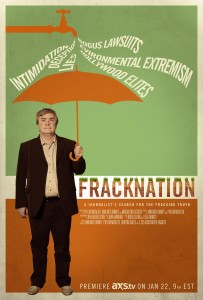 A new feature-length documentary on the hotly debated subject of hydraulic fracturing—a technology for extracting oil and natural gas—debuted last week in New York and Los Angeles. FrackNation, a production of Ann and Phelim Media LLC, presents the facts surrounding this controversial technology and counters many of the misconceptions surrounding it.

The film follows investigative journalist Phelim McAleer on his quest to discover the truth about this revolutionary energy source. It is largely a rebuttal of the anti-fracking documentary Gasland by Josh Fox, which has been hugely influential in the movement to ban fracking both in the United States and worldwide. In case after case, by directly seeking out the people and places cited by Fox, and digging deeper into the stories behind Fox’s anti-fracking claims, McAleer shows that the truth about fracking is not anything close to the damning portrayal of the process by Fox and others who oppose the technology. Fox comes off as a sensationalist fear-monger, and his reactions to requests for clarification, caught on film, are telling.

FrackNation is much more than just a rebuttal, however. In its presentation of the facts about fracking, it defends and gives a voice to those who, until now, have been effectively silenced because their stories don’t fit the environmentalist anti-fracking narrative. McAleer’s expose includes visits to family farms that host successful fracking operations on their land, as well as discussions with personnel from energy companies that operate there. The film demonstrates how property rights and contracts enable these groups to cooperate and work together in mutually beneficial and highly productive ways. (In this regard, the film presents a wonderful real-life concretization of Ayn Rand’s trader principle.)

Having helped fund its completion through the producers’ KickStarter campaign, I had been eagerly anticipating the film’s release. When I attended the L.A. screening last week and saw the results on the big screen, I couldn’t have been more proud to be a backer of the project. The film is beautifully produced, enjoyable, and engaging.

FrackNation has been picked up by Mark Cuban’s AXS TV network which will air it on January 22 at 9 p.m. ET (6 p.m. PT). In the meantime, for those in or near New York City or Los Angeles, FrackNation is in limited theatrical release through January 18 at Laemmle’s Playhouse 7 (Pasadena) and at Quad Cinema on West 13th St. (NYC).

Congratulations to the entire FrackNation team on an outstanding production!