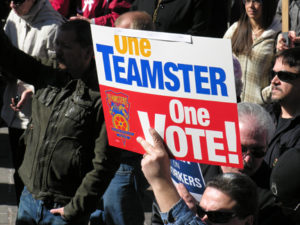 Of course, when Obama speaks of the “right to bargain,” he does not mean the right of individuals to freedom of association and contract; he means the “right” of the state to force employers to negotiate with unions. And, of course, the state has no such right. But nor are the so-called “Right-to-Work” laws an equitable solution.

“Right to work laws” essentially outlaw agreements between unions and companies that require membership in, or financial support of, the union as a condition of employment—the so-called “closed,” agency, or union shop. These laws are alleged to protect workers’ rights to freedom of choice in regard to his association with a union.

Employees, whether individually or collectively or through a representative, do have a right to bargain non-coercively with willing employers. Accordingly, a company and its employees have a right to negotiate a voluntary contractual agreement that requires union membership as a condition of employment. But “Right-to-Work” laws, by outlawing union shops, violate employers’ rights to set employment terms, including the right to contract exclusively with a union if it chooses.

“Right-to-Work” laws emerged as a reaction to other rights-violating laws that impose an alleged “right to bargain for better wages”—”bargain,” here, meaning “coerce”—which “right” is otherwise known as collective bargaining “rights.” These “rights”—which are not rights but government-granted permissions to violate the rights of others—emerged under laws such as the National Labor Relations Act, also known as the Wagner Act, which force companies to “bargain” with unions.

A proper, rights-protecting government does not pass such laws. Nor does it outlaw voluntary union shops. As long as there is no fraud, breach-of-contract, or other rights-violating actions, the government has no role in labor-management relations. The government properly steps in only to protect the rights of individuals to contract voluntarily, and to enforce the terms of their contracts. “Collective Bargaining Rights” laws and “Right-to-Work” laws are equally rights-violating, thus equally illegitimate. The only fair solution to the kinds of political conflicts that currently beset Michigan is to repeal all such laws. The only fair solution is freedom of contract.

View all articles by Michael A. LaFerrara →
Kudos to the 800 Companies Demanding a Repeal of the Medical-Device TaxOf Hurricanes, Pork, and Subsidies
Return to Top