If Republicans cave to the Democrats’ demand to raise taxes on “the rich,” they will have conceded the left's immoral premise that the highest income earners—the so-called one percent—deserve to have their wealth confiscated because they are the wealthiest. 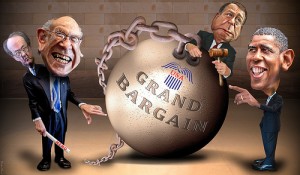 What will be the consequences of capitulating to this obscenity?

The left's immediate goal is to forcibly redistribute the wealth of the top one percent. But if—as the left asserts—this is the “moral” thing to do, why stop there? The top 2 percent have more wealth than everyone else, too. So do the top 3 and the top 5 and the top 11 percent. If Republicans accept that it is “moral” to confiscate and redistribute someone's wealth because he is wealthier than others, then Republicans have no defense against tax hikes on anyone and everyone who earns more than anyone else.

The left’s “one percent” strategy is an egalitarian trap. The logical endgame of their premises is a collectivist society of universal economic, rather than legal, equality—a society in which everyone is equally poor. This scheme is an assault not only on the so-called rich, but on every productive American. If the Republicans accede to the Democrats’ demands, the Republicans will have handed the left a political “gift that will keep on giving”—which here means redistributing—as long as there are differences in income.

Everyone who understands arithmetic knows that whatever increase in tax “revenues” follows from increasing the top tax rate from 35 percent to the pre-Bush 39.6 percent will barely dent the deficit, but the left calls for the increase anyway. Why? Because the left’s goal is not to reduce the deficit, but to redistribute wealth—and this is just the beginning.

View all articles by Michael A. LaFerrara →
Google Deserves Our Gratitude; FTC Deserves Our CondemnationThe Moral Cliff
Return to Top