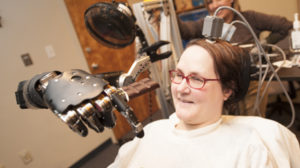 Jennifer Collinger, Andrew Schwartz, and other researchers at the University of Pittsburgh and the VA Pittsburgh Healthcare System have made spectacular progress in the treatment of severe paralysis by producing a new, highly advanced thought-controlled prosthetic arm. In a summary of their work published today in The Lancet, the research team described how they implanted two microelectrodes into the movement-controlling regions of 52-year-old Jan Scheuermann’s brain and trained her, over the course of 13 weeks, to move it by means of her thoughts. According to the report, “[Scheuermann] was . . . able to use the prosthetic limb to do skillful and coordinated reach and grasp movements that resulted in clinically significant gains in tests of upper limb function.”

Scheuermann, who has a genetic disease called spinocerebellar degeneration, has suffered progressive paralysis since 1996 and is now quadriplegic and unable to voluntarily move any muscles below her neck. Nevertheless, she has an extraordinarily positive outlook, saying “I can’t even shrug my shoulders. But I have come to the conclusion that worrying about something is experiencing it twice. I try to dwell on the good things I have.” The trial use of her neuroprosthetic arm has, little-by-little, enabled her to perform tactile skills which before were impossible for her, culminating in a delightful video of her achieving a personal goal of feeding herself a piece of chocolate.

The research team has even bigger plans for future trials. They hope one day to make the device wireless and to include sensors so that patients can feel temperature and other sensations with the prosthetic. Collinger describes the group’s goals: “We’re hoping this can become a fully implanted, wireless system that people can actually use in their homes without supervision. It might even be possible to combine brain control with a device that directly stimulates muscles to restore movement in the individual’s own limb.”

Though the device has only helped one patient so far, Collinger, Schwartz, and their colleagues are engaged in research that may one day improve the lives of thousands of severely paralyzed individuals. Kudos to these heroic men and women of the mind.