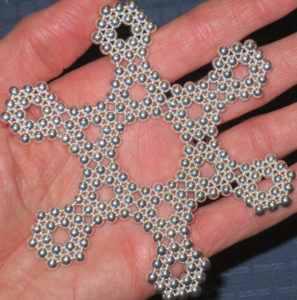 It felt like Christmas had come early when I got my package of Buckyballs in the mail a few days ago. Buckyballs are small, super-strong spherical magnets made of the rare earth metal neodymium. A set of 216 Buckyballs fits comfortably in the palm of your hand.

I stared amazed as I formed the balls into a long string and held one end in the air, the rest of the balls held in place by nothing but their magnetic attraction. The company that makes Buckyballs, Maxfield and Oberton, states, “The arrangement of electrons in rare-earth elements lets them develop strong magnetic fields.” No kidding! Then I fashioned the balls into a snowflake pattern. Others have built elaborate structures with multiple sets of the balls.

Buckyballs, I soon discovered, are toys for the mind. They are a thinking person’s toy. How can you play with them and not wonder about the chemical nature of rare earth metals (something about which I know hardly anything), and the nature of magnetic forces, and the sheer technological genius that goes into producing these little balls?

Obviously Buckyballs are adult toys, and Maxfield and Oberton emphatically warns users not to give them to children, eat them, inhale them, or place them near objects (such as pacemakers) that are sensitive to magnets. However, for those who use Buckyballs with common sense and due care, they are reasonably safe—just like countless other objects in or around the home from hammers to knives to sugar to prescription drugs to firearms to bicycles to automobiles.

What has been the government’s response to Buckyballs? Has it been to recognize the outstanding productive achievements of the company that makes them? To leave the company in peace to conduct its business? Of course not. The government has put Maxfield and Oberton out of business so far as Buckyballs are concerned. The sets I ordered are among the last that will be produced, ever.

Maxfield and Oberton states on its web page, “You've heard about our ongoing battle with the CPSC [Consumer Product Safety Commission]. Due to their baseless and relentless legal badgering, we've sadly decided to stop production of Buckyballs and Buckycubes. We still have a few thousand sets in stock, but once we sell through those, they're gone for good.” The company relates the sad story on its web page and in a letter from CEO Craig Zucker. The government declared Buckyballs to be unsafe—which is the same thing as declaring adults to be too stupid and irresponsible to use them safely. . . .