The Heroes who Enabled Advance Warning of Sandy 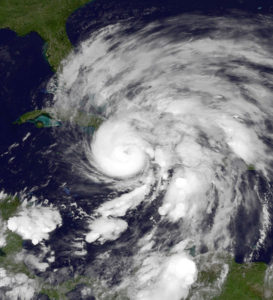 It was unexpected and unannounced, sudden and surly, inundating, devastating, mutilating, obliterating. It battered and bludgeoned the shore until there was no more shore, until it was all running water and milling debris, until almost every trace of a human presence had been washed away.

Hurricane Sandy? Nope. That was the Great Atlantic Storm that struck the East Coast of the United States, its main fury focused on New Jersey, on March 6, 1962. The quote above is from the 1993 book Great Storms of the Jersey Shore in its documentation of what NJ weather experts at the time termed “the worst storm recorded since Colonial times.”

Fifty years ago, storms were much harder to predict—hurricanes in particular. Weathermen could do little more than observe their zigs and zags, and warn coastal residents based on a hurricane’s direction-of-the-moment. Much less was known about how upper atmospheric conditions and other factors affected the strength and paths of these storms.

Fast-forward to October 2012. From the moment Sandy formed in the Caribbean Sea, forecasters predicted that the storm could make an extremely freakish sharp westward turn toward the northeastern United States, rather than continue on the usual northeastward track toward the open waters of the North Atlantic. Equally impressive was the crucial forecast that Sandy would transform into a super-powerful "nor'easter" and strengthen as it approached the coast, rather than weaken as hurricanes typically do in the northern latitudes. (A nor'easter is a type of storm, common to the northeastern United States, that feeds off of the contrast between the Atlantic’s warm gulf stream and cold Canadian air masses over land, and that is enhanced by a dip in the northern jet stream combined with a high-pressure system in southeastern Canada.)

The morning that the Great Atlantic Storm struck, a mad scramble to evacuate the coast coincided with howling winds, rising seas, and heavy snows—all utterly unexpected the day before. Fortunately, the Jersey Shore was much less populated in 1962. It was mainly seasonal bungalows, boardwalks, and a fraction of the development that is there today. And since the storm struck in winter, there were relatively fewer people to evacuate.

But in the last 50 years, the Jersey Shore population has grown tremendously.

Had meteorologists been stuck with 1962 technology when Sandy struck, the scenario in 2012 would have been much different. On Sunday evening, October 28, Hurricane Sandy, moving northeastward off of the North Carolina coast, would have seemed to be heading harmlessly out to sea. East Coast residents would have gone to bed oblivious to the gathering threat, as did coastal residents in 1962. And, similar to 1962, they would have awoken Monday morning, October 29, to panicky reports that Sandy had unexpectedly turned west toward Atlantic City. Mere hours, rather than days, would have remained to facilitate mass evacuations.

While weather prediction may never be an exact science, and future forecasts may not always be this accurate, one has to be impressed by the scientists and engineers who made possible the accurate tracking of this storm. There were many heroic stories during and in the aftermath of Sandy. But perhaps the greatest heroes are the men and women who developed the weather predictive technologies—from satellites to powerful supercomputers—that enabled the meteorologists to head off what could have been a much greater loss of life in New Jersey, New York, and southern New England.

View all articles by Michael A. LaFerrara →
Letter to the Editor
Amazon Kindle E-Reader Brings Books to the Developing WorldVirginians Vote to Defend Property Rights
Return to Top