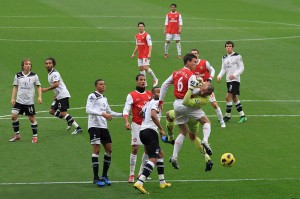 Recently the Professional Footballers' Association (an English soccer trade union) called for new rules “to make sure qualified black coaches are on interview lists for job vacancies” and to establish monitoring of “the proportion of black coaches and managers,” reports the Guardian. The Association drew inspiration for its proposals from the “Rooney Rule” in American football—named after Pittsburgh Steelers owner Dan Rooney—requiring teams to interview minority candidates.

It is again a kind of racism and what we have all to fight for is just competence, to put people who are good—are they white, black, red, no matter what color—just put guys who have a competence in charge. . . .

I [have] always been against discrimination. . . . What they call it in France is "positive discrimination." I feel that no matter what job you do in life, you should just do it because you deserve to do it and you have the quality to do it.

You have to favor access for everybody to manage in football. Just to put a quota out, for me is exactly against what sport has to be—sport is about competition and competence. . . .

You judge people on facts and on what they did in life. I never considered where you come from or what color you are. . . . We have to keep the priorities right—that means people who want to do a job, who have the qualities to do a job, to give them the job.

Wenger, himself the coach of a club with players from 20 nations, is right to condemn the proposed rules. Although a private football league properly has a political right to engage in racist hiring policies if it so chooses, racism is nevertheless morally wrong. People should be judged by their character and talents, not their skin color.

View all articles by Derrick Nantz →
The Moral Integrity of Condemning Social Security While Collecting ItWhy Your Vote for Romney Matters, Swing State or Not
Return to Top