Rooting Out the Motive of "Plant Rights" Advocates 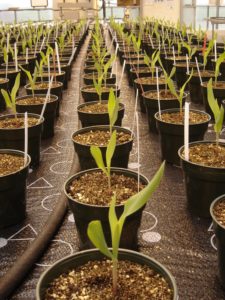 Almost forty years after animal rights advocates began asking us to put down our steak knives, plant advocates may start asking us to relinquish our salad forks as well.

Plants have rights too, they say, and we ought to “reconsider our ethical approach to eating them.” Michael Marder, a philosopher writing recently for the New York Times, bases a call for “plant liberation” on the idea that plants possess a primitive form of “awareness,” in that they have a capacity to react to certain stimuli, and that they engage in a simple form of biochemical communication, through the release of chemical hormones that can send signals to other nearby plants.

Now, most readers of this argument will think that the idea of plant rights is silly—indeed, many responders to his article said so. But while Marder’s argument is ridiculous, his goal is serious, dangerous, and not to be ignored. Here we should take the advice of Ellsworth Toohey, villain of The Fountainhead: “Don’t bother to examine a folly—ask yourself only what it accomplishes.”

So what does Marder seek to accomplish through his call for “plant liberation”?

Marder reveals part of his motive when he explains that, contrary to the implication of his article’s title, “If Peas Can Talk, Should We Eat Them?,” he does not proscribe all consumption of plants:

How do these new [scientific] findings [about plants] bear upon dietary ethics? First, they do not mean that we should stop eating plants. Rather, the idea is not to reduce plants to storehouses of carbohydrates and vitamins or to that other source of energy so widely applauded today, biofuel. . . . It is especially pernicious to grow plants from sterile seeds, already robbed of their reproductive potential, patented and appropriated by profit-driven enterprises. Not only do these agricultural “innovations” harm farmers, who are forced to buy seeds from multinational corporations, but they also violate the capacity for reproduction at the core of the Aristotelian vegetal soul. [emphasis added]

Adding to the clarity of his goal, Marder goes on to say that “[v]iolence against plants backfires, as it leads to violence against humans and against the environment as a whole, for instance when plants are genetically modified and made resistant to insects, pests, or disease.”

Marder is not advancing the idea of plant rights because he cares about the interests of plants; he has no problem with our growing and eating them. Nor is he overtly anti-farmer; he expresses concern for them. Rather, as a careful reading of Marder’s article reveals, his real animus is against profit-seeking, multinational agricultural biotechnology companies that patent and sell a variety of genetically-modified plant seeds. In short, Marder is not pro-plant, he is anti-Monsanto.

Though agricultural biotechnology companies such as Monsanto have enabled the vital production of greater yields of high-quality crops, allowing for cheaper and more widely available food, Marder seeks to curtail these life-promoting values through a sophistical argument for “plant rights.” In so doing, he reveals himself to be no different from scores of other environmentalists who, though they hide behind a veneer of concern for “the environment,” are actually anti-industry and, therefore, are anti-man.