Review: The One World Schoolhouse, by Salman Khan 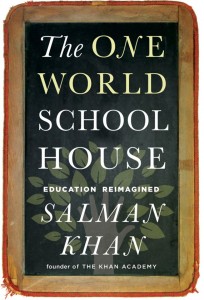 In 2009, Salman Khan quit his job as a hedge fund analyst in order to devote time to Khan Academy—a grand name, explains Khan, for an entity with meager resources:

The Academy owned a PC, $20 worth of screen capture software, and an $80 pen tablet; graphs and equations were drawn—often shakily—with the help of a free program called Microsoft Paint. Beyond the videos, I had hacked together some quizzing software running on my $50-per-month web host. The faculty, engineering team, support staff, and administration consisted of exactly one person: me. The budget consisted of my savings. I spent most of my days in a $6 T-shirt and sweatpants, talking to a computer monitor and daring to dream big. (p. 5)

Khan’s dream was big. His mission was to “provide a free, world-class education for anyone, anywhere” (p. 5). And this, in part, is how he planned to provide it:

My basic philosophy of teaching was straightforward and deeply personal. I wanted to teach the way I wished that I myself had been taught. Which is to say, I hoped to convey the sheer joy of learning, the thrill of understanding things about the universe. I wanted to pass along to students not only the logic but the beauty of math and science. Furthermore, I wanted to do this in a way that would be equally helpful to kids studying a subject for the first time and for adults who wanted to refresh their knowledge; for students grappling with homework and for older people hoping to keep their minds active and supple.

What I didn’t want was the dreary process that sometimes went on in classrooms—rote memorization and plug-in formulas aimed at nothing more lasting or meaningful than a good grade on the next exam. Rather, I hoped to help students see the connections, the progression, between one lesson and the next: to hone their intuitions so that mere information, absorbed one concept at time, could develop into true mastery of a subject. In a word, I wanted to restore the excitement—the active participation in learning and the natural high that went with it—that conventional curricula sometimes seemed to bludgeon into submission. (p. 6) . . .

View all articles by Daniel Wahl →
Letter to the Editor

Apple’s App Revolution: Capitalism in ActionReview: Let Them In, by Jason L. Riley
Return to Top