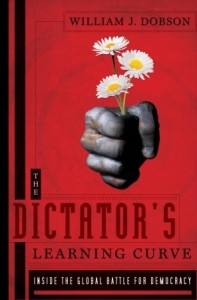 At the beginning of The Dictator’s Learning Curve: Inside the Global Battle for Democracy, William Dobson states a fact that is all too clear for anyone who studies history or reads the news:

Authoritarian governments rarely fret over United Nations sanctions or interference from a foreign rights group that can be easily expelled. Indeed, the mere threat of foreign intervention, whether from the United States, the United Nations, or a body like the International Criminal Court, can be a useful foil for stirring up nationalist passions and encouraging people to rally around the regime. (p. 9)

Dobson follows this observation with an important truth that few people grasp regarding dictatorships:

When observers look at only one side of the coin—the dictators—they see regimes that appear all-powerful. They concentrate on a dictatorship’s massive security apparatus, its divisions of riot police, soldiers, intelligence officers, informants, and paid thugs. They focus on the regime’s tight grip on media, major industries, the courts, and political parties. Perhaps they see a culture of fear, grinding poverty for the majority of society, and government coffers fed by corruption and control of oil fields or other natural resources. And of course there is the brutality: any regime that has no compunction about jailing, torturing, or murdering its critics will not be easily ousted, so the thinking goes.

When they consider all of these conditions, outsiders see little reason to believe anything will change soon. So when revolution does come—whether it be the Philippines, Poland, South Korea, Indonesia, Serbia, Tunisia, or countless other places—most experts, academics, and policy makers write it off as a fluke, a rare or unique experience unlikely to be repeated. . . . . . .