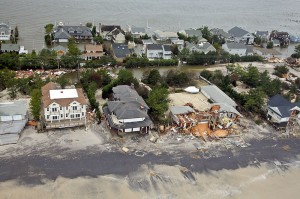 James Stacey Taylor, associate professor of philosophy at the College of New Jersey, explains that Christie promised to vigorously enforce state law imposing a $10,000 fine for anyone “found taking certain steps to help bring in much-needed items that were in desperately short supply after Hurricane Sandy smashed into the state last week.”

Strangely, this move failed to draw much criticism from the people it hurt—those who might now do without heat, lights, water or food as a result. Indeed, many even cooperated, providing the state with more than 1,200 leads on people who were working to bring essential supplies into the worst-hit areas of the Garden State.

In his colorful way, Taylor highlighted the nonsensical nature of laws forbidding so-called “price-gouging.” What is Christie’s idea of “gouging?” A 50% price premium? A doubling? Quintupling? Not at all. “Price-gouging” is legally defined in NJ as a price hike of ”more than 10 percent over pre-emergency levels.” That’s right: 10 percent. The price of forbidding this miniscule premium, Taylor noted, “is to virtually guarantee that much-needed items will become scarce during an emergency.”

Taylor goes on to make the irrefutable economic case against laws banning price-gouging, a form of price controls.

More important than the economic case, however, is the moral case: Individuals have an inalienable right to contract voluntarily, on mutually agreed terms, including price, at any time, so long as the transaction (or trade) doesn’t involve the initiation of physical force or fraud against anyone—that is, so long as it doesn’t violate anyone’s rights. The moral and the practical go hand in hand. This principle can be summed up in two words: free markets.

Taylor concludes with this call to action:

If . . . the governor and the [NJ] Division of Consumer Affairs . . . really wanted to help their fellow citizens in the aftermath of disasters such as Hurricane Sandy, they should work on repealing the laws against price-gouging, instead of diligently enforcing them.

Kudos to Taylor for "defending price-gouging in Sandy’s wake."