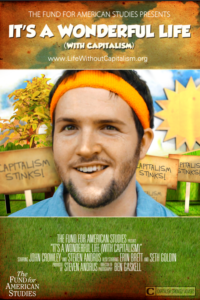 The Fund for American Studies (TFAS) is asking those who think life would be better without capitalism to think again. Their newly released short, “It’s A Wonderful Life! (with Capitalism),” features an anti-capitalist protester who, after excitedly uttering the words “Life would be so great without capitalism,” is knocked unconscious by an overzealous, sign-wielding companion and catapulted into a Soviet-style alternate reality.

There, guided by a capitalist pixie (or perhaps “pig”sie?), he sees first-hand that all of the values he cherishes in capitalist America, from his hair gel to his coffee to his Microsoft Xbox, are conspicuously absent in the dismal socialist world. He also sees first-hand the force that’s required to maintain a statist regime—when he tries to protest his condition, he is met with a baton-brandishing police officer who sends him back to the real world, where he happily tears his sign and starts cheering for capitalism.

The short is, of course, a play on the Christmas Eve classic, It’s A Wonderful Life, in which James Stewart’s character, George Bailey, wishes he had never been born and, briefly, gets his wish. The TFAS short departs from the film in this regard: By depicting a world that still has some left-over trappings of capitalism (e.g., refrigerators, indoor plumbing), it neglects to show how bad things would be in a world into which capitalism had never been born.

In less than seven minutes, “It’s A Wonderful Life! (with Capitalism)” does a brilliant job of concretizing the evils of statism. A short video, of course, is limited in what it can accomplish, and this one does not offer a moral defense of capitalism. Those who are seeking more can do no better than to read Ayn Rand’s Atlas Shrugged, which, in the course of a riveting mystery, presents a full moral defense of capitalism while showing a world in which capitalism is crumbling.

Image: The Fund for American Studies