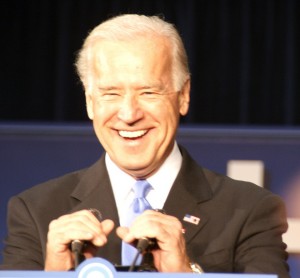 Laughing Joe Biden, during the vice presidential debate, made clear his commitment to egalitarianism:

[I]nstead of signing pledges to Grover Norquist not to ask the wealthiest among us to contribute to bring back the middle class, they [Republican candidates] should be signing a pledge saying to the middle class we're going to level the playing field; we're going to give you a fair shot again; we are going to not repeat the mistakes we made in the past by . . . [continuing] to hemorrhage these tax cuts for the super wealthy.

Biden’s remarks are, as usual, riddled with absurdities. Most of the “wealthiest among us” became wealthy by producing goods and services that enhance or save people lives, and, in the process, providing many people with jobs. Thus the “wealthiest among us” have already “contributed” to the “middle class” in spades (not that they had any duty to make such a contribution in the first place).

Moreover, the top ten percent of income earners “pay almost half (45 percent) of the country's total taxes,” and, as I’ve pointed out, many wealthy Americans already suffer the double injustice of double taxation. Increasing taxes on the wealthy would not give the middle class a “fair shot”; rather, it would further violate the rights of the wealthy and, consequently, deprive the economy and many in the middle class of much-needed capital.

Biden clearly does not want a “level playing field” in the sense of equal treatment before the law. If that’s what he wanted, he would call for an end to the confiscation of wealth from the most successful producers.

When Biden says he wants to “level the playing field,” he means he wants to forcibly confiscate even more wealth from the wealthy and dole it out in the form of subsidies, welfare, and entitlements so that everyone will be more “equal.”

Talk about repeating the mistakes of the past: Everywhere it is been tried, the eat-the-rich strategy that Biden endorses has resulted in rights violations and economic destruction.

The government should “level the playing field” in the only way consistent with the Declaration of Independence and the U.S. Constitution: by equally protecting each individual’s rights—including his right to keep or spend his resources as he sees fit.