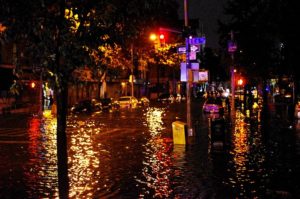 Another day, another dishonest hit piece on Ayn Rand. This time, though, Sanjay Sanghoee’s smear, penned for Huffington Post, despicably uses the tragedies surrounding the deadly Hurricane Sandy to misrepresent Rand’s views in order to smear her.

Sanghoee begins his “argument” with the fantasy that Glenn Beck is somehow a spokesperson for Rand, despite the fact that Beck has explicitly denounced Rand’s philosophy and that Rand certainly would not have agreed with his. Sanghoee then claims that, because Beck approved of a fire department refusing to fight a fire at a home whose owner hadn’t paid a municipal fee, Rand would not approve of anyone providing emergency assistance without payment in the aftermath of Sandy.

[T]here was not a single soul in New York City who did not have access to emergency help last night, no matter who they were, how much they paid in taxes, where they were from, what God they worshipped (or not), or anything else. . . . [The opposite approach] obviously comes straight out of the pages of Rand's world, in which humans are "pay for play" and any service provided for free is irrational and immoral since it violates the tenet of self-interest. To help others without being compensated runs against her fundamentalist capitalist philosophy, which favors profit over humanity and cold logic over compassion.

Put aside Sanghoee’s asinine claims that profit—which here means mutually beneficial exchange among willing participants—is somehow inhuman or that logic is somehow incompatible with compassion. Put aside his ridiculous suggestion that Rand somehow would approve of legal discrimination based on place of birth or religion. Those claims are so obviously dishonest as to require no further reply.

Is it true, as Sanghoee suggests, that Rand would never countenance the act of assisting others in need without payment? No. Rand certainly believed that, in the normal course of life, one properly produces goods and services and trades them with others for profit. However, in emergency situations—and Hurricane Sandy certainly qualifies—Rand argued that assisting others without compensation can be totally appropriate.

Not that those smearing Rand bother to pay attention to what she actually said or wrote, but Rand did explicitly address this issue in her book of collected essays, “The Virtue of Selfishness”: “It is on the the ground of . . . generalized good will and respect for the value of human life that one helps strangers in an emergency.” However, Rand warned, one cannot draw broad moral principles from emergency situations; it is not true “that emergencies, disasters, catastrophes are the norm of . . . life.”

Further, Rand argued, a policy of altruism—that is, self-sacrificial service to others—cannot be justified by emergency situations, though advocates of altruism attempt such a justification:

Observe . . . that the advocates of altruism are unable to base their ethics on any facts of men’s normal existence and that they always offer “lifeboat” situations as examples from which to derive the rules of moral conduct. . . . The moral purpose of a man’s life is the achievement of his own happiness. This does not mean that he is indifferent to all men, that human life is of no value to him and that he has no reason to help others in an emergency. But it does mean that he does not subordinate his life to the welfare of others, . . . as disasters are marginal and incidental in the course of human existence—and that values, not disasters, are the goal, the first concern and the motive power of his life.

With honest, truth-seeking critics, one might further discuss the proper means to finance organized emergency help, the proper role of government in emergencies (and in general), and Rand’s ideas on such matters. But it is obvious that Sanghoee and his ilk are not interested in understanding or debating Rand’s ideas; their goal is not to grasp and evaluate Rand’s ideas but to distort them, to smear her, and to discourage others from seeing for themselves what she has to say.

Thankfully, active-minded readers will recognize Sanghoee’s article as the tawdry hit piece that it is.

View all articles by Ari Armstrong →
Does a Big Storm Require Big Government?Cheers to the Heroes Driving the American Oil and Gas Boom
Return to Top