Ayn Rand vs. Obama: Whose Ideas are Right for Teens (and Adults)? 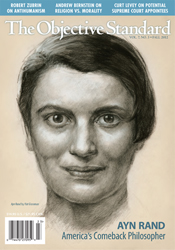 In his recent interview with Rolling Stone magazine, President Obama, following the lead of other leftists, implies that Ayn Rand’s ideas are not for mature, intelligent adults, but rather for immature, ignorant teenagers—“17 or 18 and feeling misunderstood,” as he puts it.

Much could be said of Obama’s comments on Rand and teenagers (Ari Armstrong addresses some important points here), but I’d like to focus on the most basic principles and alternatives at hand.

What are Rand’s basic ideas? What fundamental principles did Obama encounter in Rand’s books (if he in fact read them)? What are the alternatives to those principles? And which of these is appropriate for teens and, for that matter, adults?

The most basic of Rand’s ideas is that reality is an absolute; that things are what they are regardless of anyone’s hopes, fears, or desires; and that for our ideas to be of practical, life-serving value, they must correspond to reality. So, for instance, on this principle, if someone were to create a business, then acknowledging that he created it would be right (i.e., in correspondence with the facts); denying that he created it—saying, “You didn’t build that”—would be wrong (i.e., in contradiction to the facts). Likewise, if terrorists were to attack and kill American diplomats in Benghazi, then acknowledging this incident as an act of terrorism would be right; evading the fact that it was an act of terrorism would be wrong. Similarly, if, during a presidential debate, one’s opponent were to point out the fact that one had failed, for more than two weeks, to acknowledge publicly that a given terrorist attack was indeed a terrorist attack, then acknowledging that one’s opponent is correct on this matter would be an act of honesty; denying it would be an act of dishonesty. And so on.

Another of Rand’s basic principles is that each individual should act in his own rational self-interest and should respect the rights of others to do the same. This is the essence of what Rand famously called “rational egoism” or “The Virtue of Selfishness,” which entails recognition of the fact that human life requires and depends on rational thought, self-interested action, and, consequently, political and economic freedom—freedom from physical force or fraud—so that one can act on the judgment of one’s own mind.

On this principle, if someone uses his mind, produces values, respects rights, and earns wealth, then his actions are virtuous, because they are selfish, and his wealth is properly his to keep and use as he sees fit, because he earned it. The alternative is to hold, as Obama does, that “there’s no virtue in” making “a virtue out of selfishness”—and to demand, as Obama does, that we must “spread the wealth around” by forcibly taking it from those who produced it and giving it to those who did not. Again, the question arises, which position is best for teens and adults to embrace? Which view is mature and intelligent? And, again, I’m confident that most Americans know the correct answer.

The problem is not that Americans are ignorant with respect to such issues; the problem is that too few Americans know how to state such matters, as Ayn Rand did, in terms of principles. When this changes—when a substantial number of Americans begin to grasp political issues in terms of moral and philosophic principles—the left will lose all credibility, and America will become what it is supposed to be: The land where each individual’s rights to life, liberty, property, and the pursuit of happiness are recognized and protected.

Help spread Ayn Rand’s principled perspective. The left can’t live with it, and we can’t thrive without it.