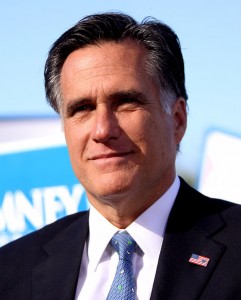 Responding to criticisms of his comments about the “47%”, Mitt Romney, in an attempt to turn the tables, zeroed in on a quote from 1998 in which Barack Obama explicitly endorsed government-enforced redistribution of wealth. But in attempting to rebut Obama, Romney granted Obama’s basic premise.

I believe the right course for America is one where government steps in to help those that are in need. We're a compassionate people, but then we let people build their own lives, create enterprises. We believe in free people and free enterprise, not redistribution. The right course for America is to create growth, create wealth, not to redistribute wealth.

Whenever the government “steps in to help those that are in need," it must take from some to give to others; that is, it must coercively redistribute wealth. By claiming that such redistribution is “compassionate,” Romney not only grants that it is politically legitimate; he implies that it is morally mandatory. Where does that leave the idea of “free people and free enterprise?”

To be against coercive redistribution except when one is for it, is to be for it. As long as Romney accepts the false premise that the needs of some justify “government help” at the expense of taxpayers, he will be for coercive redistribution; he will be unable to distinguish his policies in any fundamental way from Obama’s; and he will call for and enact rights violations.

View all articles by Michael A. LaFerrara →
Richard Salsman: Religion of Democracy Undermines RightsObama’s Apology vs. Responsibility Regarding the Libyan Murderers
Return to Top