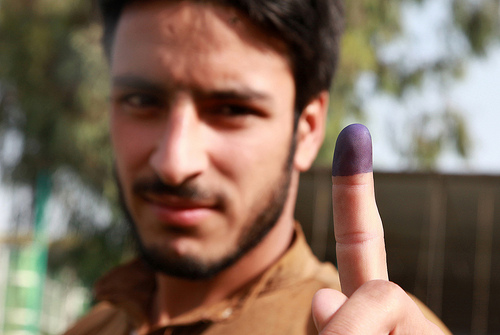 What explains the U.S. government’s cowardly appeasement of Islamist violence in the Middle East? As Richard Salsman explains in his recent column for Forbes, one major cause is the worship of democracy by U.S. leaders:

Asked if Egypt was still a U.S. ally, [Barack] Obama dissembled: “I don’t think we would consider them an ally. But we don’t consider them an enemy. They are a new government that’s trying to find its way. They were democratically elected.” For democracy zealots like Mr. Obama, the most important thing about the Muslim savages ruling Egypt is not that they are savages and U.S. foes, but that they were “democratically-elected.” Democracy zealots believe the vote validates anything, just as Weimer Germany thought it validated Hitler and his Nazi Party in the 1930s.

America’s founders opposed democracy and established a constitutional republic, in which citizens vote for representatives in a limited government. Properly, government acts only to protect individual rights, not to impose the will of the majority.

Throughout much of the Middle East today, democracy sanctions and empowers Islamist theocrats bent on imposing religious dictatorships and, ultimately, a worldwide caliphate. Neither theocracy nor democracy is compatible with individual rights. Salsman summarizes, “Irrationality and state-worship assume many forms, but the forms most responsible for great harm have been religion and democracy.”

Read Salsman’s complete article for his lengthier discussion of Islamist barbarism throughout the Middle East—and of the America’s sanction of that democratic barbarism.

View all articles by Ari Armstrong →
The Meaning of Appeasement in the Middle EastRomney vs. Romney on Coercive Wealth Redistribution
Return to Top