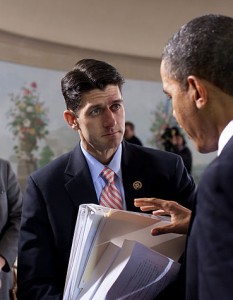 At times, Paul Ryan says things that would make the Founders proud, as with the following comments from his convention speech:

When I was waiting tables, washing dishes, or mowing lawns for money, I never thought of myself as stuck in some station in life. I was on my own path, my own journey, an American journey where I could think for myself, decide for myself, define happiness for myself. That's what we do in this country. That's the American Dream. That's freedom, and I'll take it any day over the supervision and sanctimony of the central planners.

Ryan also summarized Barack Obama’s presidency in a single sentence: “None of us have to settle for the best this administration offers–a dull, adventureless journey from one entitlement to the next, a government-planned life, a country where everything is free but us.”

Unfortunately, Ryan’s political proposals fail to live up to his pro-liberty political rhetoric. Rather than recognizing people’s rights to think for themselves, decide for themselves, and define happiness for themselves, for instance, when it comes to planning for their retirement and health care expenses, the “Romney-Ryan administration will protect and strengthen Medicare,” a massive entitlement program. Rather than leave people free to decide how to spend their own wealth, Romney and Ryan “will keep federal spending at 20 percent of GDP, or less.” In other words, the federal government will leave us only four-fifths free to use the fruits of our labor—and state and local governments will seize “only” another fifth or so of our wealth.

Nevertheless, Romney and Ryan promise at least to slow the growth of government and the increase of rights-violations, and this can buy time for advocates of genuine liberty to educate more people about the moral foundations of a free society.

And Romney and Ryan at least recognize commonsense justice: “What [businesspeople] deserve to hear is the truth: Yes, you did build that.” That’s a lot more than can be said for Obama.