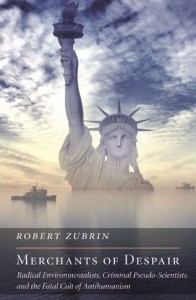 Did you know that the U.S. government subsidizes forced sterilization of women throughout the Third World, and that both Republican and Democratic administrations have supported this policy? This is just one evil among many that Robert Zubrin documents in Merchants of Despair: Radical Environmentalists, Criminal Pseudo-Scientists, and the Fatal Cult of Antihumanism.

Zubrin’s thesis is this: “Antihumanist” movements implicitly or explicitly hold that “humans are a cancer upon the Earth, a horde of vermin whose unconstrained aspirations and appetites are endangering the natural order” (p. 6). Among these movements are Malthusianism (population control), eugenics, and the campaigns against DDT, nuclear power, “global warming,” and genetically modified food.

Zubrin, a nuclear engineer and an amateur historian, writes in clear, nontechnical language—often eloquently, and sometimes passionately—and he has done his research: eighty of the book’s three hundred pages are devoted to references and notes.

For each movement, Zubrin provides a “focus section” in which he debunks propaganda by reference to facts. Population control and its sister movement, eugenics—which span the late 18th century to the present and across many countries—are Zubrin’s central focus in the book. He addresses these over the course of ten chapters, each devoted to a different era or country. He covers the other movements in separate chapters interspersed between the ten on population control and eugenics. This alternating back and forth between topics is jarring, but it aids Zubrin in showing how the various movements are interconnected historically and philosophically. . . .

View all articles by Ted Gray →
Letter to the Editor
Review: The Financial Crisis and the Free Market Cure, by John AllisonReview: Ameritopia: The Unmaking of America, by Mark R. Levin
Return to Top