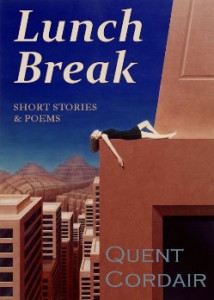 Around the middle of one of the short stories included in Lunch Break, Garret Brace, the hero of the story, walks into a room where one of his favorite childhood movies is playing.

The movie was about a woman whose mission it was to find a cunning enemy agent, to seduce him and kill him. There was little known about the man, not even his name. Armed only with a blurred photograph, a small handgun and her determination, she tracked and pursued him all over the world, always coming within just a few moments or a few steps of seeing him. As she learned his every habit and motivation, she became increasingly captivated, and driven as much by a need to see his face as by the necessity of completing her task. Finally, she followed him to a remote desert, certain that he wouldn’t be able to elude her there—but she became hopelessly lost. Overcome by exhaustion and the burning heat, she fell to the sand.

Lifting her eyes, she saw him on the crest of the dune above her, traced against the white desert sky. Pulling herself to her knees, she drew the gun and aimed . . . but her hands began to shake. She wiped a tear away with her sleeve.

The description of this movie (the above is partial) is typical of “A Prelude to Pleasure,” the short story it came from, as well as the others in Lunch Break, a collection of short stories and poems by Quent Cordair.

Cordair, a painter as well as a writer, uses words as a painter uses paint. Here, for example, Cordair’s description of what the woman is armed with—“a blurred photograph, a small handgun and her determination”—serves as a sort of portraiture in action, selectively showing readers her character, deadly intentions, and conflict. Cordair’s descriptions of other characters and their actions are as extraordinarily selective and effective—whether showing their strengths, weaknesses, dilemmas, emotions, or any other elements. Consider his introduction of the hero in “A Prelude to Pleasure”:

Garret Brace was soaring seven miles above the earth, flying faster than sound. When the snowcapped Rockies came sharply into focus, he pulled the wheel back with one finger, pushed the throttle in with another and sent his plane climbing toward a wall of dark thunderclouds. The white machine sliced neatly through them and shot out into an empty blue sky, where below, there was only a carpet of cottony cumulus stretching away to the distant horizon. (p. 3)

This shows rather than tells readers what they need to know about Brace. They see that this is a man who can deal with the challenges of living and acting in this world.

It also indicates what readers can expect to find in abundance in the unique world of Quent Cordair’s short stories: stylistic romanticism—not naturalism. Cordair’s characters are in control of their lives, they choose their actions, and their choices drive the story. . . .

View all articles by Daniel Wahl →
Letter to the Editor
Review: Double Cross, by Ben MacintyrePrinciple vs. Pragmatism in Supporting Romney-Ryan
Return to Top