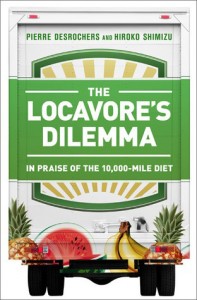 Observe the enormous bounty of food at your local grocery store. Note the fresh fruit and vegetables from around the world—bananas and coconuts are imported from Caribbean islands; strawberries, melons, and peppers travel from California or Florida to stores across the land; blueberries and mangos come from Central and South America; and so on.

Likewise, meat, fish, eggs, and dairy originating from distant agricultural producers are available in abundance throughout the year. Chilean, South African, and Australian producers supply food for consumers during the winter months of northern U.S. states and Canada, where the growing season is short. Whether coffee from Sumatra, rice from India, or lamb from New Zealand, a great variety of food is always available and affordable, thanks to the producers, shippers, and distributors who make it so.

What if, instead of being imported from all over the world on trains, planes, boats, and trucks, all of our food had to be produced locally? Would our food be fresher, more nutritious, and safer if it were not produced and distributed by industrial operations? Professor of geography Pierre Desrochers and his wife, Hiroko Shimizu, address these questions and more in their book The Locavore’s Dilemma.

“Locavores” are people who believe that “an ever-growing portion of our food supply should be produced in close physical proximity to the consumers who will eat it” (p. 4). Desrochers and Shimizu describe locavorism as part of a larger cultural movement that is concerned with “the nature of foodstuffs being supplied” according to the SOLE components: Sustainable, Organic, Local, and Ethical (p. 4). The authors observe that “locavores belong to an environmentalist sect that makes a moral issue out of where your food is grown” (p. 8). . . .

View all articles by Andrew Brannan →
Letter to the Editor
Review: Ameritopia: The Unmaking of America, by Mark R. LevinLA Times Writer Calls for End of First Amendment
Return to Top