Review: The Financial Crisis and the Free Market Cure, by John Allison

The Financial Crisis and the Free Market Cure: Why Pure Capitalism is the World Economy’s Only Hope, by John Allison. New York: McGraw-Hill, 2012. 320 pp. $28 (hardcover). 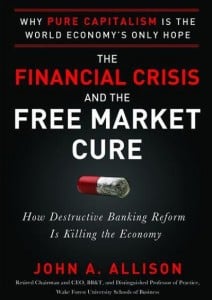 Imagine how great it would be to have your own inside tour guide to the modern financial crisis, someone able to comment on the crisis not as an onlooker, but as the leader for two decades of one of America’s strongest financial institutions.

Imagine no further. Your guide is John Allison, former CEO of Branch Banking & Trust Corporation (BB&T), and his fee for the tour is the cost of his new book, The Financial Crisis and the Free Market Cure.

Although numerous others have outlined the basic causes of the mortgage meltdown—the easy-money policies of the Federal Reserve, the Community Reinvestment Act and similar regulations, hazardous lending spurred by Fannie Mae and Freddie Mac, and the federal government’s “too big to fail” policies—Allison offers an in-depth, insider’s perspective on these policies. He also discusses a variety of other, subtler ways that government policy created and worsened the financial crisis, giving his book a depth unmatched by other popular works on the topic.

Allison does not limit his discussion to the political and economic causes of financial crisis; he also discusses the broader philosophical and cultural causes of both this crisis and the loss of economic liberty more broadly. . . .