Review: Ameritopia: The Unmaking of America, by Mark R. Levin 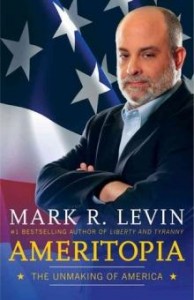 The title of Mark Levin’s latest book, Ameritopia, is his term for “the grave reality of our day” (p. x), an America in transformation from a constitutional republic based on individual rights into a totalitarian state. The book is not a political manifesto. For that, Levin refers the reader to his previous book, “Liberty and Tyranny,” in which he warns about “the growing tyranny of government . . . which threatens our liberty, the character of our country, and our way of life” (p. ix).

In Ameritopia, Levin goes deeper, posing the question: “[W]hat is this ideology, this force, this authority that threatens us? . . . What kind of power both attracts a free people and destroys them?” (p. x) “The heart of the problem,” he argues, is “Utopianism . . . the ideological and doctrinal foundation [that] motivates and animates the tyranny of statism” (p. xi).

To make his case, Levin takes the reader on an illuminating and entertaining philosophical journey through history in layman’s terms.

In chapter 1 of part I, On Utopianism, Levin explains “The Tyranny of Utopianism” and contrasts it with its antipode, individualism and limited constitutional government. Some excerpts:

Tyranny, broadly defined, is the use of power to dehumanize the individual and delegitimize his nature. Political utopianism is tyranny disguised as a desirable, workable, and even paradisiacal governing ideology. There are, of course, unlimited utopian constructs, for the mind is capable of infinite fantasies. But there are common themes. The fantasies take the form of grand social plans or experiments, the impracticality and impossibility of which, in small ways and large, lead to the individual’s subjugation. (p. 3) . . .

View all articles by Michael A. LaFerrara →
Letter to the Editor

Review: Merchants of Despair, by Robert ZubrinReview: The Locavore’s Dilemma
Return to Top