Principle vs. Pragmatism in Supporting Romney-Ryan 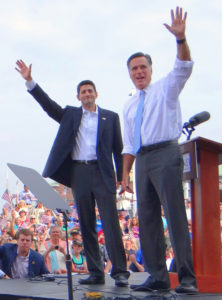 Here is another question I’ve received in various forms regarding my endorsement of Mitt Romney and Paul Ryan: “Isn’t it pragmatic and unprincipled to campaign or vote for Romney-Ryan on the grounds that the ticket is merely less bad than Obama-Biden?”

This question entails a misunderstanding of both pragmatism and principle.

Pragmatism is not the weighing of alternatives, but the rejection of principles, truths, absolutes. Philosophical pragmatists, such as John Dewey and Richard Rorty, reject principles across the board, openly proclaiming that there are no absolutes or truths; there is only what “works.” Political pragmatists, such as many Republicans today, do not necessarily say that there are no truths, but they nevertheless fail to recognize that the principle of rights is an absolute. They regard rights as rules of thumb, and they aim to do what “works” politically.

Contrary to claims of pragmatists, principles do exist and are absolutes. Principles are fundamental truths or ideas to guide people’s thought and action. But, properly understood, principles are not purposeless rules or contextless absolutes; rather, they are purpose-oriented tools that are properly applied with respect to the context of a given situation. To apply a principle correctly, one must recognize the purpose of the action in question, and one must apply the principle with respect to both that purpose and the surrounding facts.

Voting in a presidential election for the less-bad ticket among two possibilities when those possibilities are the only viable alternatives, and when there is some value to be gained by voting for the less-bad alternative (e.g., more time to educate people about the moral foundations of freedom), is not pragmatism but an act of principle. It is the application of the principle that the purpose of voting in a presidential election is to help put into office the best (or least bad) team that can possibly be elected at the time. To refrain from voting when one of the only two viable alternatives is significantly worse than the other is to aid the worse ticket by withholding a vote for the less-bad one.

(To vote for a candidate who has no chance of winning, such as Gary Johnson in this election, is to do the same thing. Johnson supporters would do well to recognize the principle that “ought” implies “can.” To use one’s vote to say that Johnson should be president is to imply that it is possible for him to be president. But it is not possible—so there is no “should” about it. And even if Johnson could win, his choice to join the Libertarian Party, not to mention his suicidal foreign policy, would disqualify him.) . . .

View all articles by Craig Biddle →
Letter to the Editor
Review: Lunch Break, by Quent CordairTodd Akin and the GOP’s Abortion Problem
Return to Top