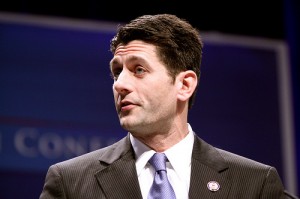 Why does Paul Ryan simultaneously advocate the individual’s right to think for himself, decide for himself, and define happiness for himself—and advocate a massive and growing entitlement state that abrogates those rights by forcibly redistributing an individual’s wealth?

The answer is that Ryan advocates the morality of altruism, the notion that the individual must sacrifice for others. Here is how Ryan described this in his convention speech:

We have responsibilities, one to another—we do not each face the world alone. And the greatest of all responsibilities, is that of the strong to protect the weak. The truest measure of any society is how it treats those who cannot defend or care for themselves.

Clearly Ryan does not mean that an individual with ample wealth may rationally choose to donate some portion of his wealth to charity in a non-sacrificial way in order to advance his own values and happiness. Nor does he mean that one may choose to stand up to a playground bully if one has the capacity to do so.

In his comments, Ryan refers not to chosen responsibilities consistent with an individual’s moral right to pursue his own life and happiness, but to unchosen obligations or “duties” to sacrifice one’s own interests for the sake of others. That is why Ryan advocated protecting entitlements during his convention speech, and that is why in April he vowed to strengthen the government “safety net that is failing our most vulnerable populations.” The policies of statism flow inexorably from the morality of altruism.