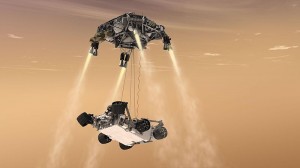 Although a number of recent headlines have been depressing (if not horrifying), we can rejoice in the wonderful news that NASA successfully landed the new Mars rover “Curiosity” on the planet late Sunday night. Scientists will now use the rover to explore Mars and search for possible signs of past life.

As shown on the livestream during the landing, scientists cheered, applauded, hugged, cried tears of joy, and raised their arms in victory. Tens of thousands of people throughout America and the world celebrated with them as the first new images from the Red Planet came back from the rover.

Adam Steltzner, an engineer leading the work on the rover’s descent and landing, said he regards curiosity as mankind’s greatest attribute. The rover is aptly named.

Some other time we can decry the funding sources for this space mission and President Obama’s politicization of the landing. For now, let us just celebrate this wondrous technological accomplishment and the great minds that made it happen.

As Steltzner said of the landing in NASA’s popular video previewing the event, “It is the result of reasoned engineering—thought.” For a glimpse of the complexity of just the landing of the rover, watch the five-minute video, “Challenges of Getting to Mars: Curiosity's Seven Minutes of Terror.” And just imagine the thought involved.

Long live Curiosity—and the thought that created it.