Can Paul Ryan Make the Moral Case for Capitalism? 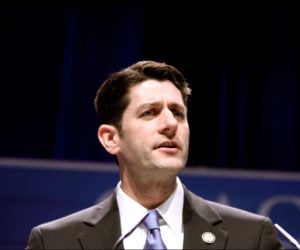 Ryan explicitly attempts to make the “moral case” for capitalism, arguing that “people have a God-given right to use their creativity to produce things that improve their lives.”

Ryan’s attempt to defend the morality of capitalism is a good sign. Over the years, many free-market advocates have made excellent economic arguments for capitalism, but this has done relatively little to stem the tide of statism. Ryan, to his credit, recognizes the importance of making a moral argument.

Unfortunately, although Ryan speaks out against “crony capitalism” (which is properly called fascism), his own voting record—including his votes for the TARP bank bailouts and auto industry bailouts—undercuts his case.

If Ryan were to repudiate his earlier capitulations to statism, he could win over many voters. Most Americans are willing to forgive a politician who acknowledges past errors and makes amends. On the other hand, if Ryan continues to dig in and defend those statist votes, he will further undermine his credibility—just as Mitt Romney’s persistent defense of his Massachusetts health care plan continues to undermine his credibility.

As Ayn Rand points out, capitalism leaves men free to pursue their self-interest according to their best independent judgment. And, as a cursory glance at history or at the Index of Economic Freedom confirms, to the extent that capitalism has been tried, it has led to prosperity and human flourishing.

Ryan partially and implicitly recognizes the importance of rational self-interest when he states that capitalism enables people to “improve their lives,” but he fails to make the connection that improving one’s life is a clearly self-interested pursuit. This failure should come as no surprise because Ryan’s Catholicism requires him to reject the morality of self-interest. And, in so doing, it undercuts his ability to defend capitalism.

Fortunately, with the renewed media attention now being given to Ayn Rand and her ideas—in large part because of Ryan—more Americans are learning where they can find a logically grounded, uncompromising moral defense of the social system of human prosperity. Hopefully, Ryan’s supporters will let him know that Rand’s ideas are good all the way down. And perhaps one day he will come to embrace the philosophy that supports freedom.